USA In February…Perfectly Normal? Sort Of…

Funny how things even out…

East of the Mississippi River and especially in the Northeast, 2015 has been brutally cold and snowy so far.  All the headlines would have you thinking the world has come to an end.  Part of that is because the big snowstorms have affected high population spots.  But the cold the past few days has been quite historic in the south.

That said, would you be surprised if I told you the USA was WARMER than normal in January and is running right at AVERAGE for February?  Hard to believe but it’s true!

January numbers show Oregon was the warmest state compared to normal and the nation saw it’s 24th warmest on record.

February has been more extreme, as you’ve seen on the news! 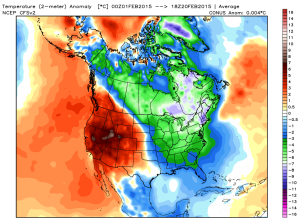 Very cold with the coldest relative to normal in the northeast and warmest in Utah/Nevada.

The whole country averaged together as of this evening is pretty much average.  It’ll probably end up a bit cooler than normal a week from now when the month ends since the upcoming week looks much cooler in the Rockies and Intermountain region.

Enjoy the weekend!  It looks bright and sunny after patchy clouds tomorrow morning.  Windy on Sunday but nothing we haven’t seen plenty of this winter.  East wind gusts should remain below 40 mph in the metro area and not much stronger in the Gorge since it’ll be a widespread downsloping event.  In those cases the Gorge wind typically isn’t much stronger.

This entry was posted on Friday, February 20th, 2015 at 11:11 pm and is filed under Weather. You can follow any responses to this entry through the RSS 2.0 feed. Both comments and pings are currently closed.

5 Responses to USA In February…Perfectly Normal? Sort Of…