February is Warmer Than Every March Since 2008!

Even though it’s been warm, I didn’t realize that it’s been THIS warm!  The average temperature so far this month is running at 49.4 degrees.  That’s warmer than an average March and warmer than any March back to 2008.  Of course we still have 9 days left this month and the cooler nights coming up next week mean in the end we’ll drop back down a bit. 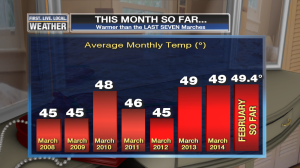 Still, this will be our 3rd very warm month.  December ran 4 degrees above normal, January 2 above, and now February about 6 above.  Quite a bitterly cold winter eh?  Wow…

Of course this is related to the warm upper-level ridging we’ve seen over and west of the west coast of North America most of the winter.  That leaves the eastern 1/2 of the USA in the freezer.  Check out the lows this morning in the South.  Cape Girardeau, Missouri had the lowest temperature ever recorded in that location this morning…-19 degrees.  Nashville only had a HIGH of 20 degrees.  Atlanta was colder last night than Anchorage, and many parts of Kentucky were colder than the interior AND arctic coast of Alaska!

We had a few weak showers pop up from the metro area north into Washington this afternoon.  Possibly we see another one or two tomorrow, but I see a mainly dry forecast for the next week.  Next real chance for rain is Thursday or Friday a week from now.

By the way, we get a shot of chilly air and gusty northeast wind on Sunday.  Models aren’t as wild with the pressure gradient and wind as they were 4 or 5 days ago.  But you’ll notice the chill even under the totally sunny skies.  Hard to believe temps in the mid-upper 40s most of the afternoon are “chilly” in late February, but that’s only because it’s been so warm lately.

This entry was posted on Thursday, February 19th, 2015 at 11:01 pm and is filed under Weather. You can follow any responses to this entry through the RSS 2.0 feed. Both comments and pings are currently closed.

19 Responses to February is Warmer Than Every March Since 2008!