Winter Is Over: What Does That Mean? 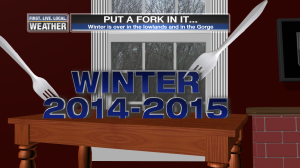 I know what you’re thinking…one of 3 things:

“What Winter?  Please, tell me when this thing called winter happened?”

“Are you nuts?  Winter doesn’t end until the 3rd week of March!”

We did actually have SOME winter this year.  You may remember the cold blast in mid-November was the earliest we’ve seen in years.  Remember the widespread Winter Storm Warnings on November 13th?  At that point I was thinking…”oh geez, it’s going to be a long winter in the weather center”.  But after that time the only other significant event was a somewhat localized windstorm in mid December that seemed to focus on the metro area up through parts of SW Washington.  That was a strange storm that didn’t do much on the Coast, central/south Willamette Valley, or Puget Sound.

Here in the lowest elevations of the Pacific Northwest, west of the Cascades, almost all our significant winter weather events happen between mid-November and mid-February.  Snowstorms, windstorms, ice storms, & flooding.  You get the idea…it’s rare to have these events (not so much with wind) outside of this time period.

But the past two months (mid-December to mid-February) have been Dullsville.  It has also been the warmest December-February on record here in Portland…so far.

Looking ahead to the next 11 days it appears the warm record may hold since we don’t see any really cold air before the end of the month.  We can see general weather patterns on our models a good 10-15 days in the future and no models are showing a stormy or unusually cold pattern through the first few days of March.  Just a return to what we should normally see this time of year (see previous post).  So…

What does that mean?  This applies to anywhere west of the Cascades (including the Coast) below 1,000′.

1. You can take your snow tires off IF you plan to stay in the lowest elevations (below 1,500′) for the next few weeks.

2. You can unwrap your pipes, or any plants that need to be protected from temps below 25-28 degrees.

4.  Strong and cold east wind episodes are finished in the Gorge.  Still windy at times, but not the really cold stuff we saw in November and December.  The east wind always disappears in early March and then reappears in the fall.

5.  Dense and widespread valley fog is unlikely between now and October.  As we’ve seen the past week, inversion season is about over.

Here’s a good idea of what we won’t see again until next winter and what is still possible: 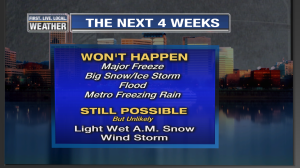 Of course we all remember March of 2012 when wet snow fell several times in March.  That’s always possible, but we’ve only seen March snow in the lowest elevations 3 times in the past 19 years!  And each time it’s been the wet/slushy overnight and morning stuff in the metro area.