Are You A Skier? Tuesday is the one good day this week!

It’s been a depressing ski season.  The majority of Oregon’s resorts were only open briefly around Christmas and the New Year.  Only 3 in the Cascades are still open, the snowpack has dwindled in the past month, and we see nothing but warm weather in the next two weeks.

But tomorrow looks a bit better with a few inches of fresh snow in the morning.  Tomorrow is your day!

It might even get cold enough for a dusting at the passes.  After that it’s all warm storms beginning with a weak warm front early Wednesday and then the rain stampedes into Oregon Thursday-Sunday.

Models are also in agreement in a strong (and warm) upper-level ridge popping up over the West Coast once the rain ends early next week.   It’s slightly early for “False Spring” weather, but it might have that feel in the days leading up to Valentine’s Weekend.  That is also the 3 day President’s Day Weekend too so an important ski weekend.

The new ECMWF monthly run from last night didn’t have any big surprises.  Week 1 and 2, which I pretty much just covered in the last paragraph: 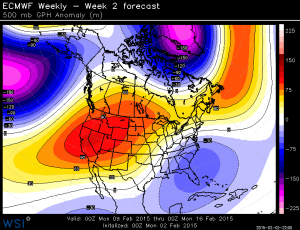 Now weeks 3 and 4 are slightly different.

Sure, there is still a strong ridge, but it’s shifted farther west and north.  More like where we saw it for parts of November.  This is a setup that could allow cold air through the backdoor from the north or northeast.  The operational run during this period has several cool and slightly wet upper-level troughs coming down from the northwest over the top of the ridge.  This COULD mean some decent snow in the Cascades the last week or two of the month.  It would also mean a cooler 2nd half of the month.  OR, it’s possible the ECMWF is pushing the ridge too far west and it’ll remain in its preferred position so far this winter.  Regardless, the pattern still means no long period of wet westerly flow.

The “Ridiculously Resilient Ridge” (RRR) doesn’t want to move far does it?

By the way, the latest GFS meteogram is sure wet…this is over Aurora, the PDX one gets too much precip from the Cascades in it.  You get the idea though, a solid 2″ rain in the 5 days Thursday-Monday 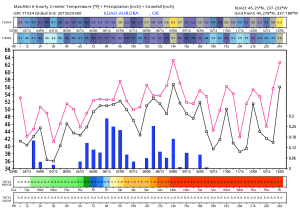