Models are still wet this evening, although not quite as extreme as 24 hours ago.  Our RPM shows 1-2″ rain Saturday/Sunday in the lowlands and 5-9″ in the Cascades 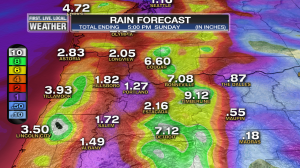 The valley numbers sure wouldn’t give us any sort of widespread flooding, but I can see mudslides/landslides in the mountains east and west of us with those much higher numbers up there.  I checked the Willamette flood control reservoirs (Detroit Lake, Green Peter, Hills Creek etc…) and they are all at their winter low levels.  That means plenty of room for storing the rain; we won’t be seeing any flooding on the Willamette or Columbia.  More likely rivers like the Wilson, Nehalem, Sandy, & Clackamas will see at least some sort of flooding.  The NWS will probably issue a flood watch tomorrow.

Bad new for the Cascades of course.  Really depressing is the tree lighting on Saturday evening in Gov’t Camp.  This will be the 2nd consecutive year in which it’ll be pouring rain for this event instead of dumping piles of snow. 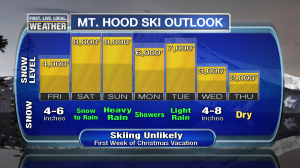 There will likely be some snow next Wednesday, but the big picture shows no chance of any widespread ski area openings through at least Friday the 26th.  Some models produce some snow the weekend after Christmas, so maybe that will help.

By the way, there are two places in Oregon to ski with at least several lifts open…Mt. Bachelor and Anthony Lakes (near Baker City).