Back to Normal: Wintry Weather Returns

Our freakish late November “heat wave” has ended.  After spending 4 days above our NORMAL HIGH TEMPERATURE (49-50), we just dropped to 48 degrees as a cold front moved overhead and the wind switched around to gusty northwesterly instead of the constant/warm south wind.

This has totally decimated what little Cascade snowpack we had.  Both Timberline and Meadows went from about a 2 foot base to just patches of snow on the ground with lots of bare spots.  The official SNOTEL sensor at 5400′ just below Timberline went from 19″ to 4″ depth.  During that time 4.80″ of rain fell.

Good news though!  Looks like up to a foot could fall in the next 18 hours.  Here’s the plan: 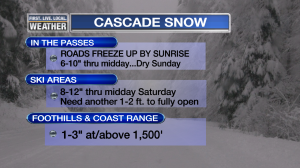 If you are traveling the next 2 days, this means bad news in the mountains… 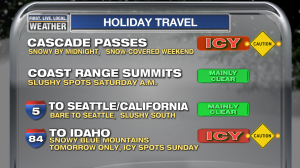 I’ll blog later (after evening models come in) about the possibility for lower elevation snow and/or freezing rain.

This entry was posted on Friday, November 28th, 2014 at 6:31 pm and is filed under Weather. You can follow any responses to this entry through the RSS 2.0 feed. Both comments and pings are currently closed.

48 Responses to Back to Normal: Wintry Weather Returns