Round #2 of wintry weather in the Gorge arrives Wednesday evening.  It’s not going to be a huge event, but freezing rain in mid-late November is still a big event in the Gorge.  It’s only overshadowed by the unusually early season snowfall last week.

A band of light rain will move from southwest to northeast across our viewing area, arriving in the Columbia River Gorge sometime after 4pm.  First at the west end and then an hour or two later at the east end. 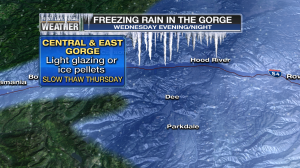 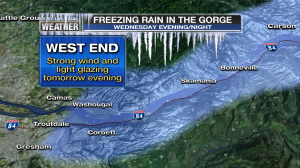 Amounts will be light, but only .05″ of freezing rain is enough to make a road a skating rink…it doesn’t take much!

As expected, easterly gradients held strong today with the depth of the cold air just under 4,000′ in the central/eastern Gorge.  It is slightly shallower today, but the warmer temps (inversion) overhead at the west end of the Gorge it causing the flow of air westward to be “choked down” to a smaller area.  Last night the peak gust was 92 mph at Vista House, the strongest recorded there (that we know of) since the sensor was installed a few years ago.  At Corbett the gust to 75 mph was the strongest since last winter!

For the rest of us in the Portland metro area we’ll see just cold rain tomorrow afternoon/evening, temperatures will only move a few degrees above 40.

The really good news is that this system will thin down the cold air east of the Cascades dramatically.  The inversion will almost totally break since the freezing level will fall from around 9,000′ tomorrow morning to 4,500′ Thursday morning.  As a result the pressure difference from east of the Cascades to westside will lower to almost nothing.  Thus the nearly calm wind by Thursday morning.  Enjoy!