It’s been 7 days/nights of cold east wind on the east side of the Portland Metro Area and many of you are tired of it.  This is when I get the “WHEN will it stop???” questions at the coffee place, Freddies…anywhere.  The answer is that we have 2 more days of wind, then it’ll stop Wednesday night.  Here are the peak gusts the past 7 days at PDX and Troutdale Airport.

Vista House/Crown Point has been gusting over 80 mph several times in the past few days…definitely a “mid-winter” strength event with 100+ mph on “the steps”.

Yes, it’s annoying, but it’s part of the cold season in our area.   The most densely populated part of the Oregon was settled just downwind from a wintertime wind tunnel; the Columbia River Gorge.  It is what it is.  If you REALLY hate it, live somewhere west of I-205 and you won’t feel it as often.  It’ll just be a little chilly and breezy and you won’t get sandblasted by dirt just getting out of your car in a parking lot.

What’s different this year is the timing…it’s just the middle of November and the wind strength/duration is what we would see in December or January.  It’s because of the cold air that has settled into the lower elevations of eastern Oregon/Washington.  Look at the dramatic change in high temperatures at The Dalles the past 13 days.  We’ve gone straight from October to January! 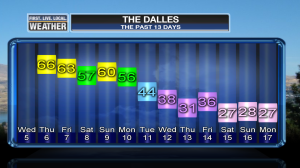 Right now the depth of the cold air is holding steady at just under 4,000′ eastside.  We can tell by looking at higher elevations in the Gorge and down into north-central Oregon.  The cold air sure isn’t going anywhere either, especially with lots of snow-covered ground to our east in those areas.  Models often try to weaken the strong high pressure eastside too quickly in these situations.

A splitting & weak weather system swings up from the southwest on Wednesday, sending precipitation overhead.  it’s pretty obvious that it’ll be rain in the Portland metro area, but it’s equally obvious it’ll be freezing rain or snow in the Gorge.  The airmass up above 4,000′ will be above freezing, so snow will be real spotty over there, mainly just freezing rain and sleet this time around.  It is a very weak system so total accumulation of anything will be light.  So this sure won’t be a big storm, but just 10 minutes of freezing rain can bring a freeway to a halt.  Especially since surfaces will be quite chilly in the Gorge from the past 6 days of cold temps.

There will be a slow warmup with above freezing temps Thursday, but no west wind until Friday or Saturday.  Those of you out in the Gorge know you don’t REALLY warm up until the west wind kicks in.

By the way, assuming the ECMWF is reasonably accurate, we could get a decent dumping of snow on Mt. Hood this weekend.  Snow levels around Government Camp elevation and 12-20″ new snow.  That would be on top of the 8-10″ at the resorts right now.  If this comes to fruition, I can see some partial openings for Thanksgiving weekend.  And by that I mean at least 2-3 lifts at Timberline and Meadows.  The GFS is not as promising, including the 00z run which has rain at ski resorts Friday PM and just 5-10″ this weekend and the middle of next week (total).  That model would imply we slowly sputter towards a reasonable base sometime in early December.  I’ll take the ECMWF instead… 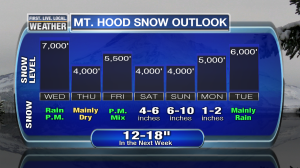