I’ve been running way behind all night since I’ve been training a new employee and doing 3.5 hours of news from 8-11:30pm. Doesn’t leave much time for blogging!

I’ve checked out all the models for Saturday when there are hints of a surface low pressure system possibility shooting up the coastline and giving us a south wind of some sort.  The 12z GFS had shown a major windstorm for our area, but following runs are much weaker.  The 12z ECMWF was pretty windy. The 00z NAM and 00z GFS are splitty and weak, nothing to see with those runs.  The 00z Canadian is windy but nothing too crazy.  The new 00z ECMWF is noticeably weaker, but the low is doing almost exactly the same movement from SW to NE.  Here’s the 11am, 5pm, and 11pm Saturday. 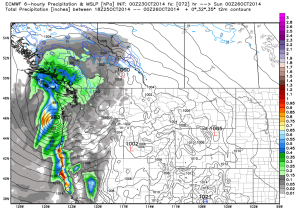 The storm moves quickly, from off Cape Blanco to Puget Sound in 12 hours!  But it weakens from around 983mb to 990 at the same time.  If you want a good windstorm you want a deepening low to move quickly.

There is no image between 5pm and 11pm, but I think it’s safe to say the ECMWF would show 50 mph gusts over the Willamette Valley based on this.

I’m not real excited for now (yet), and I’m hoping for model solutions that are much closer tomorrow so we can make a coherent forecast without a bunch of words like “possible, could be, watching, not sure, undecided etc…”

I do like that the ECMWF has shown two runs with pretty consistent solutions.

There are going to be some spots of local flooding during the evening commute in the urban areas.   Just some spots, not everywhere, but allow extra time to get to your destination!  At this point there are no flood warnings or advisories, or any weather warnings for that matter.  But I wouldn’t be surprised if the NWS issues a small stream flood advisory soon.

Take a look at rain so far…

At PDX .93″ has fallen just since 11am.  The rain has been particularly heavy on the west/southwest side of the metro area too. In my experience, when you get several hours of .30″ or more, that’s when local flooding issues start popping up across the inland valleys.  Portland saw .38″ in one hour from 1-2pm.

The HRRR model says we could see another 1/2″ or more by midnight, most of that before 7pm as the last real “wave” on the front over us moves by.  After that time we turn more showery and the threat for local ponding/flooding will pretty much end.

Thursday is a showers/sunbreaks sort of day, but still a pretty good soaker.

I’m working on the forecast right now and taking a very close look at the Saturday forecast.  Some models are producing a lot of wind in the afternoon…others not so much.