Warmest September on Record In Portland 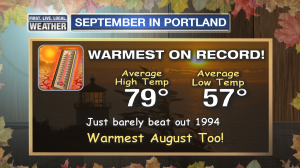 September 2014 is going to be our warmest ever recorded in Portland.  The high temperature of 67 is in this afternoon and it sealed the deal as they say since we won’t have any more highs/lows to calculate before midnight.  This September just barely beats 1994 temperature-wise.  Add August, which was our warmest ever recorded too, and it’s been a heck of an ending to summer and early fall!

This entry was posted on Tuesday, September 30th, 2014 at 5:14 pm and is filed under Weather. You can follow any responses to this entry through the RSS 2.0 feed. Both comments and pings are currently closed.

15 Responses to Warmest September on Record In Portland