You just survived the warmest August on record in Portland & Salem!  The average temperature was 73.096 degrees in Portland…got that?  That’s also the 3rd warmest month in Portland’s history.  After July 1985 and July 2009. 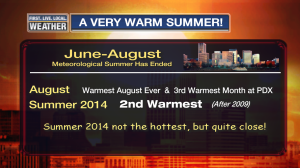 In Salem, the 72.47 degree temp was the 2nd warmest month in Salem’s history, right after July 2014!  So that means Salem just had its warmest two months on record.

It was the 2nd warmest August & month in Eugene’s history, only topped by the hot August of 1967.

As I mentioned in a previous post, the weirdest thing is that most people in the metro area probably wouldn’t say “…Whew!  that was the hottest summer I’ve ever been through here!”.   Joe Raineri & I were just talking about why.  The proof is that through this entire “2nd warmest summer on record” we didn’t have any HEATWAVE 2014 coverage in our newscasts.  Well it is true that leading up to the 99 degrees on July 1st the newsies got excited; we had to cancel that heatwave real quick when models cooled off.  But in the following two months I don’t think we ever made use of the phrase HEAT WAVE.   Basically we were consistently very warm through the last two months with almost no strong marine pushes to cool our highs into the 70s.

Coming up, it sure looks like September.  By that I mean it still looks quite dry the next 7-10 days and we have a mix of cool days and very warm (or hot) days.  East winds show up Thursday-Saturday which means very dry air…low humidity!  Ahh, warm (shorter) days and reasonably cool nights.   For some, now through mid-October is the best time of the year before the real rainy season hits in about 6-8 weeks.  I know some like the crisp/clear days of October, and so do I.  But those are often few and far between.  Cloudy days are far more common then.

I pushed the high temperatures up to right around 90 degrees both Friday and Saturday with decent offshore flow and sunshine.  ECMWF is more reliable I think with the slower arrival of a cool upper-level trough early next week so I kept temps quite warm through this coming weekend.  We get that cool trough early next week and then it’s likely ridging will nudge up against the coastline again.  You can see the Yo-Yo up/down weather the next 10 days on the ECMWF ensemble chart: 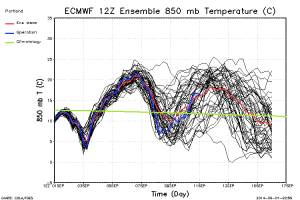 This coming weekend happens to be at the high point on that chart…it’s going to be much warmer than the Labor Day Weekend was!