I’ve been real busy the past week with Rose Festival work and some vacation time in the weather center leading to some extra hours, so no updates here on the blog.  But I didn’t miss much.  It has rained less than a quarter inch in the past 17 days here in Portland!

I don’t see any rain through at least Tuesday either.  Of course I was wondering if we’ve had such dry weather in early June…what a poor memory I (and many of you) have!  It didn’t rain the first 11 days of last June, but then the 2nd part of June 2013 was cooler, cloudier and occasionally wet.  So this is nothing unusual.

It was another beautiful Rose Festival parade today with skies clearing at the start of the Junior Parade.  As mentioned in a previous post, this dry and slightly warmer than normal weather is being caused by a persistent upper level ridge of high pressure over the eastern Pacific.  Weak weather systems are passing over the top of the ridge, then riding down through Western Canada and occasionally dipping through Washington too.  When this happens we can get a stronger surge of marine air that gives much thicker cloud cover…that happened on Tuesday.  Today the marine air was thinner and clouds were mainly gone by noon, at least along the Coast and from Portland south.  By 5pm the clouds were gone everywhere with no new cloud cover/fog developing along the Coast.  That’s a good indication we’ll see less cloud cover tomorrow: 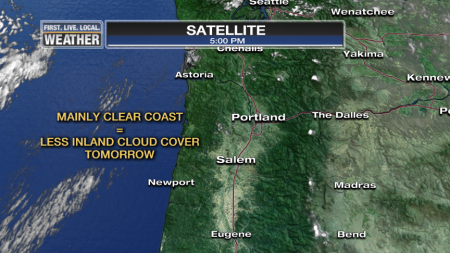 The 00z WRF-GFS cross-section backs that up showing a thinning marine layer (almost non-existent Fri-Sat) the next 3 days.  Then a bit thicker Sunday morning.  BIG PICTURE:  More nice weather ahead with abundant sunshine west of the Cascades.

Models are showing a bit of a change after Monday.  First, take a look at the ECMWF ensemble 500mb height anomaly chart for Sunday…above average heights (ridging) poking in over the Pacific Northwest.

Then notice how it backs off to the west the middle of next week.  Both the ECMWF and GEM (Canadian) show weak troughing over us

That means quite a bit more marine influence over us with more cloud cover and at least a chance for showers.  However I’ve noticed that even with the troughing nearby no models are producing much rainfall.  So as of now I don’t see a switch to a wet period, just a cooler 2nd week of June.

So does this mean we’re going to see an early start to the summer dry spell?  Hard to say; but if we get past next week’s troughing and riding returns for the 2nd half of the month then that’s a distinct possibility.