This is another nice week with temperatures more like July than mid-May.  Interesting that we had a warm-hot week, then a cool/wet week last week, and now back to another warm spell.  I don’t see any extreme heat with temps above 90 degrees for several days, but we’ll be quite close to 90 for one day…Wednesday.

We hit 78 in Portland today; quite a change from the low-mid 40s this morning!

we’ll see another 10-12 degrees warming over the next two days.  Then cooling Thursday-Saturday.   The warming is once again brought to us courtesy a strong upper-level ridge developing along the West Coast.  Take a look at the Wednesday afternoon GFS forecast:

585dm heights are real impressive in mid May.  In fact, I figure anytime 500mb. heights are 570 or above the weather is pretty decent in May and June.

Today we saw the east wind make it all the way to the beaches and it surfaced in the Portland metro area too.  The temperature sure took a jump from 11am-noon (the chart above) as the east wind kicked in…66 to 73 in that one hour.    That may happen again tomorrow and possibly Wednesday as slightly weaker easterly flow continues.    That combined with forecast 850mb temps of +18 over Salem on both the GFS and ECMWF should push us to right around 90 degrees.  2 weeks ago we hit 89 with an 850mb temp of +19 under similar offshore flow conditions.  So that’s why I went for 90 since it’s two weeks farther into the season (2 weeks closer to summer).

After that we get weak onshore flow Thursday afternoon, then an upper-level low just in time for…THE WEEKEND.  I heard some complaints about that here at work, but I reminded folks that we had some really nice weekends in January, and I think again in March.  Or was it April?  One of the latter two occurred, so quite your whining.  At least that’s what I told my co-workers.

Longer term, there is some hint that we warm up again in the days leading up to the Memorial Day Weekend.  Here’s the 12z ECMWF ensemble chart: 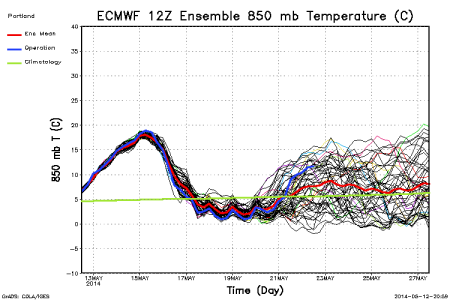 IF we get to 90 on Wednesday, this is how that will line up with other “First 90 Degree Days” in the past 6 years.

Remember those two cool summers in 2011 and 2012?  Those really were strange years.

This entry was posted on Monday, May 12th, 2014 at 11:09 pm and is filed under Weather. You can follow any responses to this entry through the RSS 2.0 feed. Both comments and pings are currently closed.

16 Responses to A Warm Week