The past few days have seen classic mid spring weather.  We seen times of cold downpours including hail and a rumble of thunder, then 10 minutes later the strong sunshine is blazing down and rooftops steam.  This is exactly what we would expect to see in May; typically interspersed with warm spells (like last week).

The weather pattern itself continues to be quite slow as we head into the next 7 days.  The general plan is for dry or mainly dry weather the next two days (TUES/WED), then showers for 3 days following (THUR-SAT) as wet westerly flow pushes through the Pacific Northwest.  Beyond that, we’re headed for another warm week similar to last week.

Here are some charts/maps to back that up.  First, the 12z ECMWF meteogram, which tends to show maximum temperatures a few degrees too low:

Note the 3 day wet period as I mentioned above.  Here is the 12z ensemble chart from the same model: 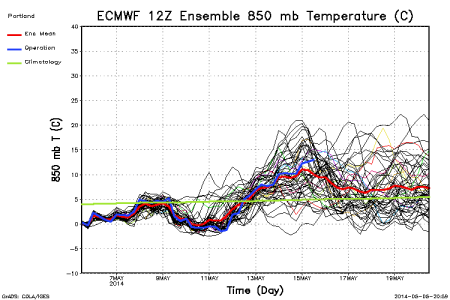 I see good agreement among all 51 ensembles for the cooldown with the rain the latter part of this week.  Snow will get quite close to the passes again Friday-Saturday.  The operational run is then right in the “middle of the pack” with respect to the warmup early next week.  It’s peaking in the lower teens the middle of next week.  You can see a few members have a stronger ridge with 850mb temps up above +15 like last week.  But a few weaker/cooler too.

Looks similar; colder than normal Friday-Saturday and then quick warming.  I took rain out of Monday’s forecast based on the dry ECMWF and this chart.  Note how the operational run (which shows rain Monday) is the lowest of all members Monday morning?  That’s the dip just before the “13MAY”.  It is dragging a cool upper level trough right over us.  So a good move to ignore the GFS for the last day of the 7 day forecast and go with the ECMWF based on this.  And now the 18z GFS chart is a bit more reasonable:

The low Monday temp is gone here as it has come around to the dry ECMWF solution.

So there you go, a real mix of cool and warm weather coming up with no long dry or wet periods.  Some pretty decent May weather!  I would say it’s been a decent spring too.  March was obviously quite wet, but April saw near normal rainfall.

Temperatures this spring have actually been slightly above average; so it appears this will be our 2nd consecutive spring without any long, drawn out cool and wet period.