Tomorrow morning at 9:57am we’ll see the Spring (Vernal) Equinox in the northern hemisphere. 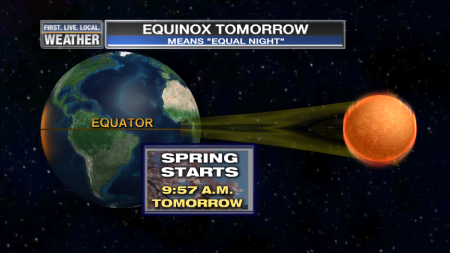 What does that mean?

The earth orbits around the sun, but the poles are not lined up directly perpendicular to the orbital plane.  Our planet is actually tilted about 23 degrees from vertical.  That means that at one point in our orbit the southern hemisphere is receiving more energy from the sun than the north and six months later it is reversed.  That’s how we end up with summer and winter, the effect being more pronounced (generally) the farther you head away from the tropics.  If you visit a tropical area you’ll find that “summer’ and “winter” aren’t really in their vocabulary since the sun is always almost directly overhead.  Tomorrow we’ll be halfway between the two points, thus the Equinox which means “equal night”.  Day/night are very close to equal in late March and in late September.

Of course you might then wonder why we aren’t halfway to the hottest time of the year climate-wise?  If the average high in Portland is 44 at the coldest and 82 at the warmest, why isn’t the average high in the lower 60s?  It’s because it takes time for the heat to accumulate on the land and in the oceans, and they are both slow to lose it, thus the delayed seasons.  If we’re talking just energy from the sun, we should be halfway through spring right now.  Obviously we aren’t.

Another misconception is that it’s winter right up until tomorrow morning.  That’s not really true either; because the coldest 3 months of the year at our latitude are December-February, not mid December through mid-March.  Take a look at the average monthly temperatures here in Portland:

Notice that March is not only warmer than December, but even a bit warmer than November!  Even if you take the coldest four months of the year, March still isn’t included and is definitely not a winter month in the Pacific Northwest.  That said, it’s a little easier to get snowfall to lower elevations in March than November.

Meteorologically we consider winter in the Northern Hemisphere as December-February for the reasons mentioned above.  How was this winter in our area temperature-wise?  Take a look at the national temperature departure from normal:

Note we were generally near normal across Washington and Northern Oregon and above average farther into the state (of Oregon).  Now I’m not into conspiracy theories, generally, but I do notice what someone else already did.  You have to look very closely to see the below average temperature areas but the opposite, above average, sticks out great due to the color table chosen by NCDC.  Much of the nation was very cold, yet this map seems to minimize it a bit.  But, maybe it’s just me.  Anyway, if you look closely at Oregon you see something interesting:

The chart above shows temperatures for Zone 2 in Oregon, the Willamette Valley area.  We had our coldest winter since 2008-2009.  Yet:

This chart shows the high desert areas of Oregon east of the Cascades had their warmest winter in about 8 years.   What?  Most likely due to the frequent inversions.   Remember all the days Salem sat in the 30s while Bend and Burns made it into the 50s?  That explains it.

What about precipitation?  No big surprise here, parts of the Pacific Northwest, especially along the coastline are in the MUCH BELOW NORMAL category.  The farther south you go along the West Coast the drier it was:

Poor California, and they are just about out of time to get significant rain this season.

So this winter was definitely drier than normal and a bit cooler than normal here in the lowlands.  Once again…a weird winter.  So far March is running wetter and warmer than average.

By the way, do you know what would happen if we were orbiting the sun without that 22 degree tilt?  There wouldn’t be any (temperature) seasons.  We would just stay the same year-round.  And you can probably guess what it would be like if we were tilted a full 45 degrees?  Even more extreme changes from summer to winter.  In that case the sun would be directly overhead at the summer solstice and it would be on the “arctic circle” with the sun hardly rising at all at the winter solstice…brrr!

This entry was posted on Wednesday, March 19th, 2014 at 9:42 pm and is filed under Weather. You can follow any responses to this entry through the RSS 2.0 feed. Both comments and pings are currently closed.