Lowest Snow Level In A Month (or so)

We’ve got some chilly Irish weather for you; appropriate enough for Ireland at least.

Yesterday’s cold front held off long enough to give MOST of the metro area a dry and warm day.  Looks like the ECMWF was wrong this time pushing in the precipitation early in the day.  It sure was close though!  Kelso was in the upper 40s or 50 all afternoon while we hit the lower 60s in a good chunk of the metro area.   Models really did quite well (even the ECMWF) showing the band of steady rain holding nearby all day and then suddenly swooping in from the northwest in the evening.

Then the cold air came in with the moisture, bringing us the first snow below 2,000′ since the arctic blast back in early February.  This morning I have a snow/rain mix at 1,000′ and you can see there was snow during the night on these ODOT cameras around 1,000-1,200′ along Highway 26 east of Sandy: 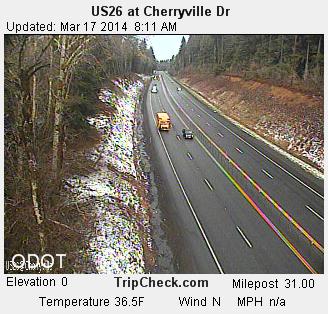 The mountains FINALLY have some decent snow today too; looks like 6-12″ has fallen up there and it’s all powder for the first time in a month too!

Showers taper off today and will be mainly up against the Cascades where the air rises, cools, and moisture condenses out of the clouds.

The weather will continue to be relatively quiet/calm the next week.  We get a cool trough swinging through on Wednesday/Thursday, then split flow COULD mean another nice weekend with rain headed into California.  We’ll see about that later this week.  You can see the gradual warming on the ECMWF maximum temperature forecast through early next week:

The ECMWF is also drier than other models too, showing just a few hundredths on Wednesday afternoon and then nothing until next Tuesday or Wednesday.  That’s because it has the Wednesday/Thursday trough a bit flatter and the air isn’t as cold with it.  We’ll see.  Once we get more clearing and the chillier airmass, expect overnight frosts to return Thursday-Saturday mornings too.

This entry was posted on Monday, March 17th, 2014 at 8:30 am and is filed under Weather. You can follow any responses to this entry through the RSS 2.0 feed. Both comments and pings are currently closed.

51 Responses to Lowest Snow Level In A Month (or so)