Temperatures dipped to right out freezing or even a notch below in the metro area exposed to the cold Gorge wind overnight.  That means lots of reports of light ice accumulations, generally not on the roads though.  Take a look at the ODOT Camera at I84/I205

But there are no travel issues in the metro area because as I’ve mentioned in the past, you really need temperatures down to 30 at night to see roads start to ice up.  And during the day it needs to be significantly colder than that to actually get a wet road to freeze up.  That’s because even on cloudy days we get some energy from the sun.  Also, in the case of today we just had a 55 degree day a couple of days ago and the ground warmed (a little).  Take a look at the ODOT road temperature sensor at I-205 and Division St.  It hasn’t dropped below 35 degrees even though the temperature has been down to 32.   As a result, any roads that are wet will stay wet the rest of the day.  There won’t be any additional icing of roads.

The icing has been quite thick (for this winter) in some spots at the west end of the Gorge.  I live at 1,000′ SE of Crown Point where the temperature has been down to 27-28 overnight.  Looks like about 3/4″ ice on everything exposed.  But even at that temperature, my concrete parking pad is wet.  Only the shady paved areas are icy.  I know I’m no great photographer, but here are a few pics from the iPhone: 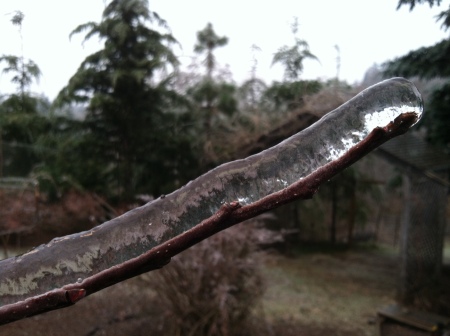 Farther east, the thicker cold air has produced sleet and then snow.  Here is the ODOT pic from Cascade Locks this morning 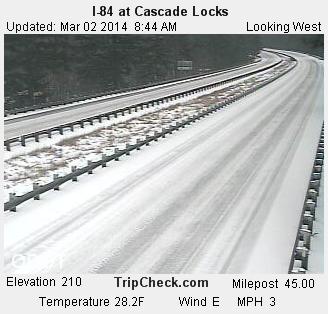 So temperatures will just warm a few degrees between now and mid-afternoon.  But after that…get out the shorts!  This appears to be a situation where we see a sudden and dramatic warming with a gusty south wind surging up the Willamette Valley.  Take a look at the surface pressure pattern at 4pm from the WRF-GFS.

A decent surface low is headed for Puget Sound.  By sunset or so we should see southerly gusts in the 30-35 mph range.  We’ll see temperatures jump into the 50s at the same time the wind arrives.  There should be enough west wind in the Gorge OVERNIGHT to push temperatures above freezing too.  It shouldn’t take too much to push temps above freezing because as I mentioned on Friday, models were far too cold for the weekend.  Remember The Dalles and Hood River were supposedly going to be 25 on Saturday?  Instead it was 35-40.  The NAM was especially bad this time along with the WRF-GFS.  The milder models did quite well (ECMWF & GFS), but our RPM was a little on the warm side, not even hinting at the freezing rain possibility on the east side of the metro area.

Enjoy the big warmup this afternoon/evening!

This entry was posted on Sunday, March 2nd, 2014 at 8:53 am and is filed under Weather. You can follow any responses to this entry through the RSS 2.0 feed. Both comments and pings are currently closed.