After the cold spell in early December, which was quite extreme in spots (-10 in Eugene!), I told quite a few people that it was VERY unlikely we’d see colder weather later in the winter.  I think I also said it wasn’t very likely we’d see another arctic air outbreak.  Now here we are forecasting another one.  Funny how in the most boring winter in years will be framed by an arctic blast on each end.  I think it was Garron on this blog who thought we might see something on this end too.  Fine long-range forecast if so!

Here are the details: 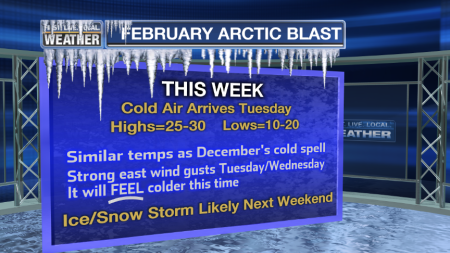 Not much has changed in my thinking.  The coldest weather, or at least coldest feeling weather will likely be Wednesday.  That’s because this time around we get a massive surge of cold air up and over the Cascades along with the usual Gorge wind.  So the entire metro area should see wind gusts in the 35-50 mph range (some power outages) at the same time temps are in the 20s.  That’s very cold.  The east wind arrives later Monday night and continues through early Thursday.  It backs off most of the daylight hours Thursday and Friday, then comes back strong for one day next Saturday as a weather system moves in.

Will it snow in the next week?  Whatever falls out of light showers late tonight, Monday morning, and again Monday evening will be in a cold enough atmosphere to at least FALL as snow.   We’re talking real light and widely scattered showers, so anything other than a dusting on a few hills tomorrow morning will be tough to do.  Same thing in the evening before it dries out.

Next weekend looks real interesting as we very quickly switch to an upper level westerly flow (mild and wet).  If current models were to verify correctly and not change (unlikely), you can expect a snow/freezing rain event on Saturday, with most of the metro area clear after daybreak Sunday.  This is what the evening ECMWF looks like Saturday at 4pm with moisture moving in while east wind (cold air) is blowing over the metro area:

Freezing conditions would likely hang on in most of the Gorge through Sunday.  By Monday we would see a jump into the 40s with a mild southerly wind.  So what we really want (for a big snowstorm) is low pressure to approach the coast a bit farther south and/or a big slug of moisture all at once on Saturday.  Details are very much up in the air since we’re 6 days away.  But the screaming message is:

The Portland metro area and Columbia River Gorge will likely see a snow/ice storm this coming Saturday; we’ll see about Salem and areas farther south.  The coast is a question mark too.  I’m assuming this will occur and am already making plans around that good possibility; you should too.