Today was the windiest day so far this winter at the west end of the Columbia River Gorge.  Here are the numbers:

And the eastern metro and western gorge locations: 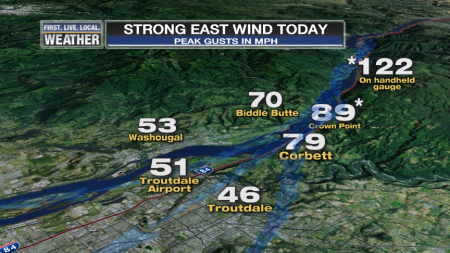 The pressure gradient between The Dalles and Portland got up to around 11 millibars, a huge drop in pressure from eastside to westside allowed the air to accelerate down the west end of the Gorge and really nail Vista House.  The 122 mph gust showed up on Matt Sloan’s Maximum anemometer.   You’ll notice it’s pegged at the top too, the scale doesn’t go any higher. 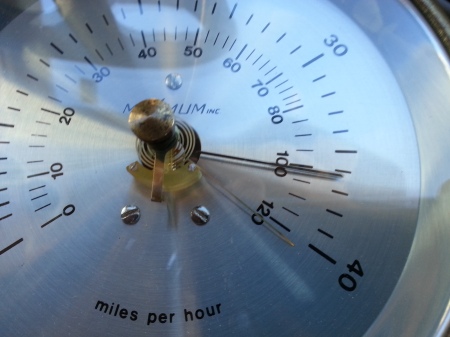 In fact I think that’s the same model I purchased with my hard-earned money around 1985 in high school.  $350 was a lot of money back then!

On this one you’ll notice a woman get knocked into the road (face down) at :30 or so.  Ouch, that’s got to hurt!

Our photographer out there today saw 3 car doors break, and one tonneau cover get ripped off by the wind.  That’s after Brian MacMillan saw a truck canopy fly off into the wind.  There must be a lot of junk in the trees down below each spring!

The pressure gradient will gradually decrease this weekend, allowing more reasonable windspeeds to return in the Gorge.  In fact by Sunday the wind should be just breezy to light out there.

The east wind has ramped up in the Gorge this morning; peak gusts are around 75 mph at Corbett and 87 (as of 8am) at Vista House.  That’s STRONGER than what we saw Monday when Matt Sloan recorded a 115 mph gust on the steps.   Since that time it appears a power outage may have put Vista House out of service.  Today is definitely a 100+ day out there.  Actually last night was too.

East wind has backed off in most of the metro area this morning but as expected the wind is much stronger in the west end of the Gorge as the flow is channeled through a smaller area.  A strengthening inversion is the reason for this.  I see observations near Estacada and Sandy around 1,500′ and above are about 10 degrees warmer at 10am compared to yesterday at the same time.  Pressure gradient is higher than what we saw Monday too, around 11 millibars from PDX to The Dalles.

Everyone else can enjoy the sunshine and mainly calm wind…oh, and don’t start any fires, there’s a Red Flag Warning for the Cascade foothills.  It’s getting real weird out there…