Is It Too Late For the Ski Areas?

The short answer is a NO.  There is still some good time available to get some great snowstorms although on average more than half the normal winter snowpack has accumulated by this point in the winter season.

The longer answer? It’s becoming increasingly unlikely that we’ll see a “great” volume of snow in the Cascades in the next month or two.  At least recent history generally tells us that.

The ski season so far has been the worst since 2004-2005.   It’s January 23rd.  There is no significant snow (more than 6″ or so) in sight through the end of the month; in fact a little rain is likely at the lower parts of the resorts next Tuesday.

So as of February 1st, we’ll likely still have a bunch of ski resorts unable to open more than a lift or two in Oregon…very rare.  That includes Cooper Spur, Summit, Ski Bowl, Hoodoo, Willamette Pass, and Mt. Ashland.  Only Mt. Hood Meadows, Timberline, Bachelor, and Anthony Lakes are near normal operations.

You may remember that I posted about a month ago on the poor snow situation.  The only thing that changed in the entire month was one minor snowstorm and one big snowstorm in the middle of the month.  Other than that pretty much nothing!  We are finishing up a 2nd week of totally dry weather and most of next week looks drier than normal too.  During that posting in late December I mentioned that in some years we’ve seen the weather pattern suddenly change at some point in January and we saw a ton of snow in the mountains as a result.

That didn’t happen; so I figured this evening I’d look back at previous snow years and see what happened from THIS POINT forward.  Take a look at the snow chart from Northwest Avalanche Center data for Mt. Hood Meadows base area.  The data go back to the early 1970s:

The red line is this year, the gray is average.  I plotted all years (8 of them) that had about 65″ or less snow on the ground on February 1st.  Right now Meadows has about 50, it hasn’t changed much in two weeks.  I see several points:

1. Almost every year that is this low at this point in the season stays below average, many years significantly below average.

2. 1/4 of those years (1978-79 & 1993-94) had a snowy pattern arrive for about a month from early February to early March, pushing snowpack up close to normal.  Interesting that in both those years March warm spells cut the snowpack back down again.

3. In another 1/4 of those years (1976-77 & 2002-03) a snowy pattern arrived in the 2nd half of February, but snowpack remained below normal. That means in one half of previous bad years there was some sort of change in the month of February, but the other half of the years we just limped along into spring without any big change.  There you go; a 50/50 chance of a big weather pattern change for the mountains.

4.  Crunch time for snow in the Cascades is the next 5 weeks.

For the weather geeks I think it’s interesting that we’re tracking close to 2002-2003 and 1978-1979 which were both mentioned by many earlier in the winter as possible analogs to this year.

In the near-term (next week or so), all models advertise a weather pattern change around next Wednesday-Thursday, but to what?  It appears the strong ridge over us will shift to the northwest (up closer to Alaska), and allow some flow from the west to arrive on the West Coast.  At the same time northerly flow coming around the big ridge tries to move south into the Pacific Northwest around February 1st.  This says we get out of the totally dry weather and go to just a more typical “drier than normal” pattern.  Meanwhile temps cool off quite a bit, especially at the higher elevations.  Take a look at the 00z GFS ensemble chart: 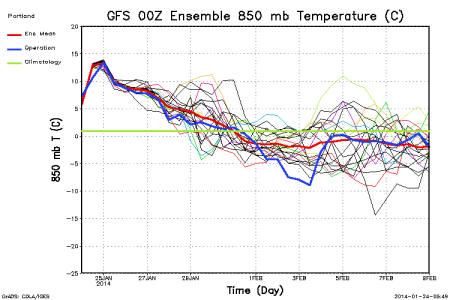 and the 12z ECMWF ensemble chart: 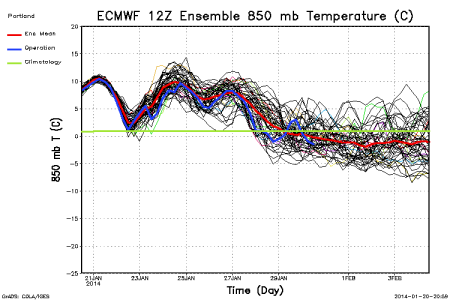 They both show temps around 5,000′ cooling off quite a bit the next 10-14 days.   With a ridge off to the northwest there’s always the chance arctic air could attempt to sneak into the Pacific Northwest, but there’s no obvious sign that is in the cards…for now.

Windiest Day in a Year in Portland

Today’s peak gust of 47 mph at PDX was the strongest since a 48 mph southerly gust a little over a year ago. 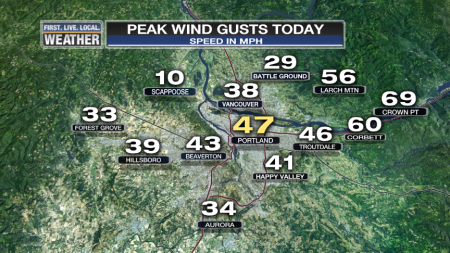 Two thoughts on that:

1) We don’t get strong wind much anymore.  The last real windstorm here in the metro area was over 7 years ago; December 2006.

2) East wind gusts in the 35-45 mph range don’t produce nearly as many power outages as the same speeds from the south.  That’s because over a good chunk of the Portland metro area trees are used to a regular beating from east wind during the winter.  It looks like there were only around 5,000 PGE customers out of power at the peak of the wind early this afternoon.  Compare that to 10-20,000 with similar speeds from the south.

It was enough to tip a traveling manufactured home off a semi trailer and almost into the Columbia River.

Can you guess where?  Of course, the “scary when it’s windy” Glen Jackson bridge on I-205.  There used to be a functioning ODOT wind sensor there, but apparently it doesn’t work anymore.  Observations from the site only show temp now.  On the flip side, I see a new ODOT sensor is working at the Sunset Transit Center at Hwy26 & 217 is working now.  That’s the windiest spot along that highway with an east wind.

The wind spread out across the whole metro area today, as we (and models) forecast.  A 39 mph from the east is a respectable speed in Hillsboro!   The pressure gradient through the Columbia River Gorge has been up around 9 millibars today and should stay about the same or just weaken a bit tomorrow.

Temperatures in the atmosphere overhead will warm quite a bit tomorrow (stronger inversion).  That means the wind should back off quite a bit in the metro area; probably peak gusts in the 25-35 mph range instead of what we saw today.  But at the same time the wind will INCREASE quite a bit through the Gorge since the inversion will squeeze the windflow into a smaller area.  Should be a raging day with 70+ mph gusts at Corbett and 75-80 mph gusts on that poor sideways sensor at Vista House.  That means up around 100 mph gusts on “the steps”.

Other than that…sunshine through the weekend and maybe into part of Monday too.  Then a change, more on that later.