A Fog Record? Not really, it can be gloomier

I checked the numbers today; and believe it or not we haven’t set any fog records in Portland yet this fall or winter.  The numbers above show it has been much worse in some years.  Although for January you’ll notice that we’ll be within 1 day of the record after Saturday.  I am very confident we’ll see dense fog after midnight tonight to give us our 10th day; after all it’s already at PDX and we’re just waiting on the clock now.  Just 2 more days in the next week and we’ll have a new January record.

It’s interesting to note the records drop off in the 2nd half of winter; that’s because we don’t tend to see strong inversions once we get to February.  That plus the upper-level atmosphere is the coldest of the winter yet surface temps are turning a bit warmer.  February has never seen more than 9 days and March goes down to 6, less than September.

Today was interesting with a strong east wind in the Gorge that lifted and moved over the fog layer in the metro area.  At one point the wind gusted to 60mph in Corbett, yet Troutdale just a few miles away was calm!  That did change this evening.  For the first time the east wind has punched through to most areas east of I-205.  That should keep fog away in those areas most of tonight; everyone else will see fog and freezing fog.  Two other things I’ve noticed this evening.  The cool airmass in the lowest 1,000′ west of the mountains has continued to cool, that means more widespread freezing fog (frost/ice on roads) overnight and Saturday morning.   And the airmass moving through the Gorge is quite a bit cooler compared to last night at this time due to a cold pool that has developed east of the Cascades.   Neither means too much to the forecast, but you know I like that stuff.

No significant changes the next few days except the east wind backs off tomorrow and Sunday (more fog/clouds), then returns Monday-Wednesday (less fog/clouds in metro area).  There won’t be enough easterly wind through next week to get rid of the fog/clouds in the valley.  As a result, south of Portland (Woodburn to Eugene) I doubt you’ll see any sun for the next 7 days!  Sorry about that.  We’ve seen it before.  Take a look at last January in Salem: 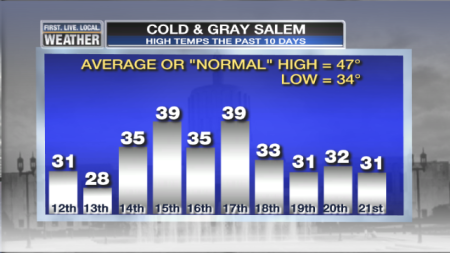