What a strange set of wet seasons.  Last year, we had extremely wet weather the first half of the wet season, then it dried out.  This year it’s been drier than normal the entire time, except for the freak week of wind and rain back in late September.  The combo of a dry end to the wet season last winter, and a dry start this winter means we had an unusually dry year.  Just 26.72″ for the year at PDX.

That means it was the driest calendar year since 1985, and the 5th driest since airport records began around 1940.

How does that rank with the last couple of decades?

Not much of a trend, some ups and downs.  You can see the wet mid-late 1990s nicely though.

Eugene, Salem, and McMinnville each had its driest year ever.  In downtown Portland, it was the 7th driest.

So what’s ahead?  Looks like drier than average the next 10 days, but not as dry as we saw in December.  A very weak system comes through late Thursday, and a few that are a little wetter next week.  Models seem to generally agree on some sort of zonal or split flow for a few days next week, beginning Tuesday.   But they also all show a very strong upper level ridge developing right around the 15th.  That’s true of both the ECMWF and GFS.   Here’s the 00z GFS ensemble chart showing the ridge (warmer temps) 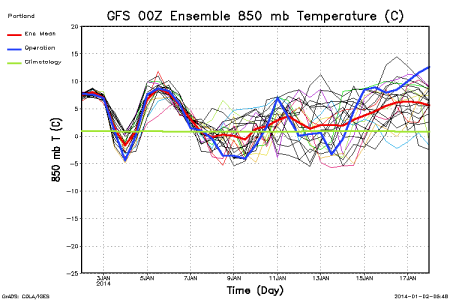 About a week ago some of us were getting excited about the GFS showing a possible change to colder weather late this weekend and early next week.  Instead that cold air is headed into the Great Plains and Great Lakes as the upper level ridge develops right over the top of us.  One more reason I trust the ECMWF which has shown this all along.  Unfortunately the result is a continuation of the boring weather.