How bad is the snow situation in the Oregon Cascades right now?  The key part of the question is “RIGHT NOW”.  As of this moment, it’s the lowest snowpack we’ve seen on Mt. Hood on this date since late December 2004.  That ended up being a terrible snow year in which the snowpack would try to build with weak systems delivering below average precipitation.  Then 4 times that winter we saw pineapple express events (warm and flooding rains) wash away the snow.  As I recall, there were weeks-long periods during January and February when even Mt. Hood Meadows had to close.  At least we haven’t seen those warm rains for a few weeks.  But still, as of this week, it is an especially bad ski season.  That could easily change. 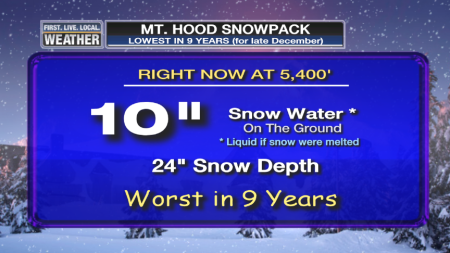 Could it change?  Definitely!  Will it?  We don’t know yet.

The numbers above are from a SNOTEL site, operated by the Natural Resources Conservation Service (NRCS) at the 5,400′ level on Mt. Hood.  It’s quite close to the bottom of the Pucci Lift at Timberline.  By the way, SWE (snow water equivalent) is the water in the snowpack if it were suddenly melted. Basically “how much snow is in the bank”.   In this case there is 24″ of snow on the ground, which if melted, would give the equivalent of 10″ of rain.

To see how our current situation compares with past years, I went back and looked at the snowpack during the 4 other years in which we’ve seen less than 12″ SWE.  Yes, there have only been 4 years since 1980 that are this bad as of January 1st!

Then I looked to see what happened.  2 of those were just disasters…poor or almost non-existent ski opportunities.  BUT, two of those saw a dramatic change in mid-late January.  1996 saw a prolonged period of lower elevation snow (1,000′ or so) dump tons of great powder during that time.  1990 saw a series of storms for almost 6 weeks starting in early January.  So there is always hope for a sudden change.  Here is a graph from the Ski Mountaineer website showing the progress of the snow depth at Timberline along with the average during those 4 winters:

I added in the horrible 1976-1977 drought year for kicks…wow.  Through mid February there was never more than 25″ on the ground!

We’ll see what happens.  Definitely no snow in the Cascades through this coming Thursday.  We should finally see at least a few inches next Friday and/or Saturday.

Then some huge disagreement on models.  Some, like the 12z ECMWF, keep the upper level ridging nearby or over us for the next 10 days.  Others (the trusty GFS!) keep trying to push an arctic air mass south over us at some point beyond day 8.  The new 00z GFS was insanely cold about 12 days from now.  Here’s some eye candy showing a 1064mb surface high over southern British Columbia and the coldest arctic air I’ve seen forecast over eastern Washington and Oregon.

Only 12 days away!  Luckily the 00z ensemble chart, showing all the other versions of the same run, show this extremely cold solution to be all by itself.  Note the blue line, which is the operational run you see above. 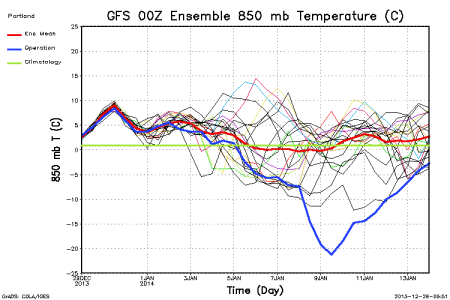 This entry was posted on Saturday, December 28th, 2013 at 10:05 pm and is filed under Weather. You can follow any responses to this entry through the RSS 2.0 feed. Both comments and pings are currently closed.