The 4 weekly maps from last night’s ECMWF run show some sort of ridging wanting to remain just off or along the West Coast through the next 4 weeks!  Not a good sign for those wanting some weather action in January.  But just one run of one model of course.  Enjoy the pretty colors: 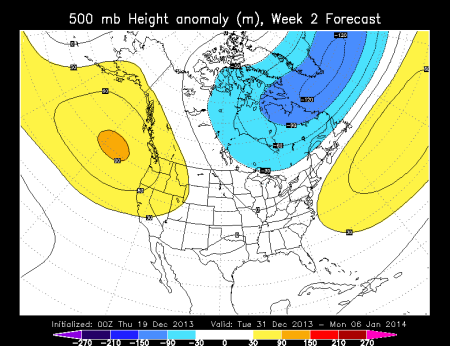 12 Hours Away: Areas of Snow & Ice Pellets For A.M. Commute

There are no watches, warnings, or advisories for late tonight and Friday morning, but anyone up and around in the late night and early morning hours may see either snow/sleet.  Either in the air or a dusting on the ground; this MAY end up just being a “conversational snow”, as we like to say, for a good chunk of us in the metro area.

Something should start falling out of the sky sometime between 3-7am.  It’ll start as snow; temps will be right around freezing, maybe slightly above.  Then right around sunrise warmer air moves in above, which means ice pellets (used to be called sleet)  are more likely.  That’s when snowflakes melt into raindrops up above and then refreeze into little chunks of ice before they hit the ground.  It has a “clinky” sound when it hits.

By 8am, the atmosphere will be too warm to support anything frozen since the freezing level will be jumping up to 8,000’.

What We Don’t Expect

Then at 9am all frozen precipitation is over in the lowlands unless freezing rain/ice pellets holds on up in northern Clark County.  And, actually it looks mainly dry at that time anyway.

I’m getting the feeling that Amboy, Yacolt, and Battle Ground are the places to be for this event.  And finally the snow total graphic showing the main accumulation “action” in Clark County:

The evening NAM model has snow a bit farther south and west into the middle of the metro area.  This is snow accumulation from 7-10am.

The sounding is definitely all snow through the 7am hour.

To wrap it up, here are the percentages I assigned to each of these events…

By the way, for those of you that work the late shift and wake up around 9am like me?  You’ll miss the whole thing!  Go ahead and sleep in.