Check out snowpack in the Cascades and other Oregon mountains…pretty bad!  Less than 50% of normal for mid December. 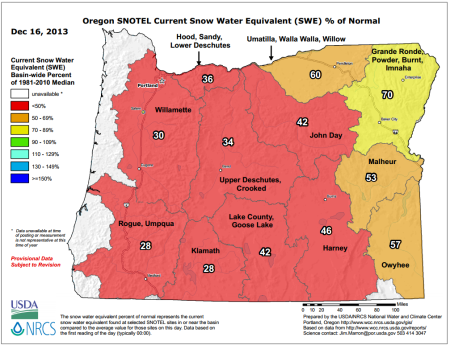 Of course it’s very early in the season, and things could turn around quickly.  But as we head toward (and into) Christmas Break, I see no change from the current dry pattern.  In fact most of the precipitation in the Cascades the next week or so will be in the form of rain, not snow.

Right now Timberline and Meadows are partially open.  A coworker that was up there today said it was great with the warm (50 degrees!)  weather, but the snow was so thin he couldn’t go off trails much at all.  Skibowl, Summit, Cooper Spur, Hoodoo, and Willamette Pass are not open yet.  I would be surprised if any of those resorts opened in the next 8-10 days.  The reason?  The same culprit that has given the Portland area only half of our typical wet season rainfall so far.  It’s an upper level ridge that continues to sit over us, or just to our west, blocking storms and/or sending them around us.  Here’s an upper-level map for Friday.  The white lines are air flow (more or less, actually lines of equal height), and the warm colors are high than normal upper heights…or ridging.  You can see the big ridge offshore. 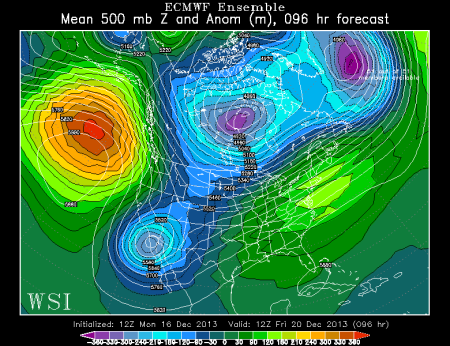 and again at Day 8, Christmas Day.  Similar setup with the ridge almost right over us: 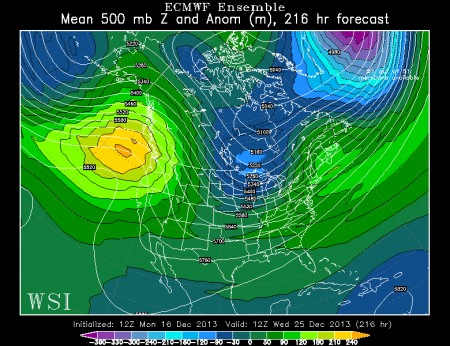 Not good; no hint of any normal Pacific Northwest winter weather pattern with a bunch of chilly valley rain and good mountain snow.

The best we get is warm and weak systems riding over the top of the ridge.  These produce drippy weather here in the valleys and rain or rain/snow up in the Cascades…yuck.  That’s what we expect for the upcoming Friday-Monday as you can see in our mountain forecast: 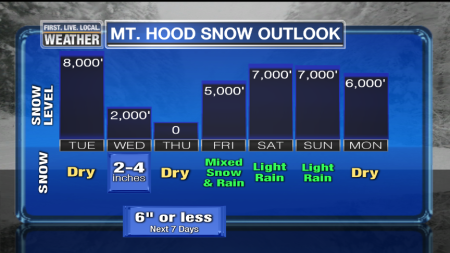 As of tonight, Timberline is reporting 27″ of snow, which is the least of any December 15th since 1989!  Most of you skiers probably remember the winter of 2004-2005…really bad.  That year was a skiing disaster with Skibowl only able to open for a few weeks and I think even Meadows was closed at times mid-winter.  That year we had 47″ on the ground in mid-December at Timberline.  BUT, there were 3 pineapple express events the following couple of months that kept destroying and fresh snow.  We’ll hope that’s not the case this time around.

This is one of just 5 times that Timberline has seen 30″ or less on the ground on December 15th.  So what happened in the other 4 years?  The following includes snowdepth on the 15th and the results:

So you can see what we’ve had so far is no guarantee of what will come for the rest of the winter.  I remember ’89-’90 real well, all sorts of avalanche issues and highways closed due to feet and feet of snow from mid January to late February.  I think Stevens Pass had 18′ in 3 weeks!

I’m quite confident that we’ll see very little new snow in the Cascades over the next 10 days, but who knows what is out beyond that time.

Here is one hint from the ECMWF model weekly maps.  It’s similar to the map above but a whole week at a time average into one map.  Weeks 1-4, which takes us into the 2nd week of January: 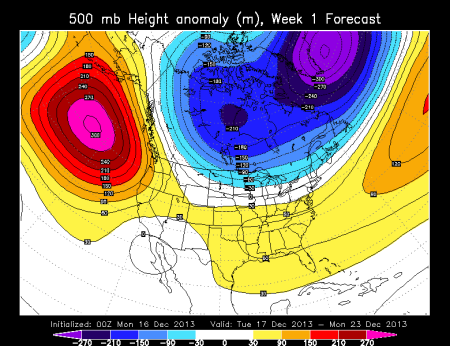 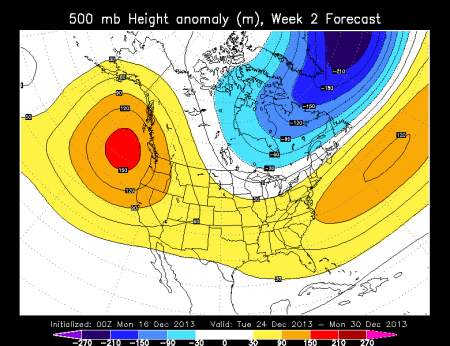 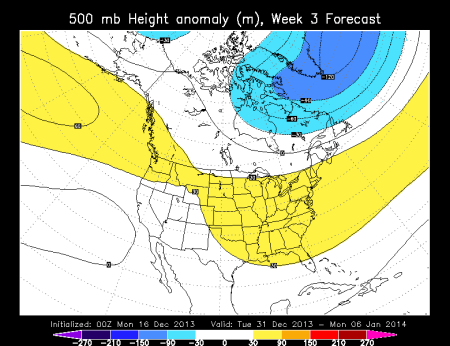 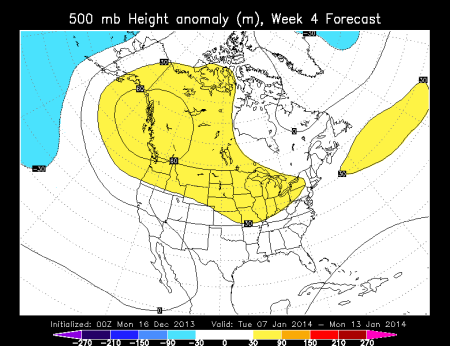 Looks like the ridge wants to continue hanging out…hopefully not.

By the way, we’ll be quite close to a brief episode of freezing rain or snow in the metro area early Friday morning as that warm and moist airmass for the weekend arrives…big question mark on whether it’ll be cold enough or not…more on that tomorrow, since it’s still 4 days away.