And look at this morning’s low temps, the coldest of the season for almost everyone. 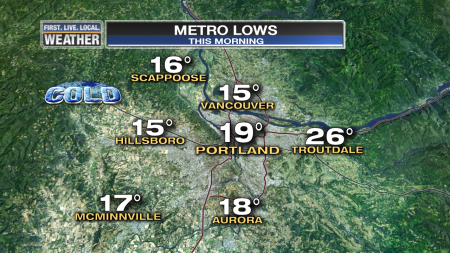 The east wind spots have been colder this season.  The breeze keeps the temperature up, thus the 26 for  a low at Troutdale.

Slightly closer precipitation to the metro area on the 12z ECMWF, but still dry here…it’ll be close! 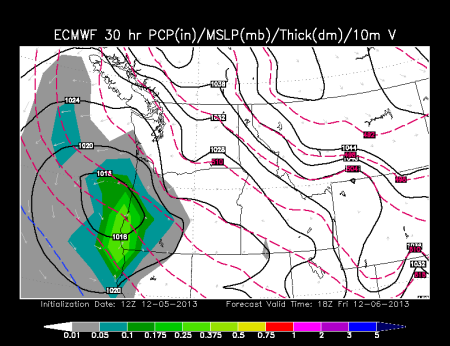 18z RPM is almost exactly the same as the 12z RPM at the closest approach to the northern valley, first the 12z, then the 18z:

But the 18z NAM is definitely a little closer to us.  Compare the two maps: 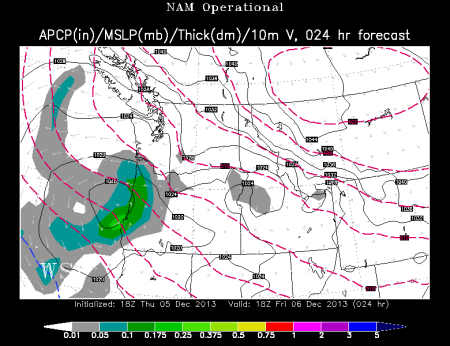 And finally the 18z text output from the RPM.  Check out that cold air!  Notice how it goes perfectly calm Saturday night.  That’s going to be crazy cold for everyone, especially those with snow cover as mentioned on previous posts. 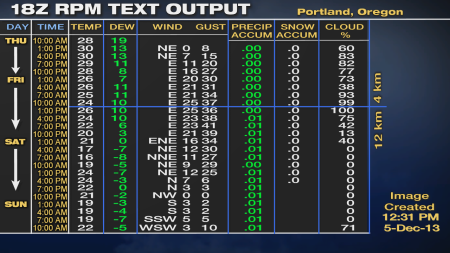 Probably no new posts until this evening so no model info comes out again until after 7pm.  Stay warm as the east wind picks up this evening!

I’ll be watching observations and radar closely as the surface low is now visible on satellite NW of Forks, WA.  So far flurries have spread down almost to Hoquiam.

This entry was posted on Thursday, December 5th, 2013 at 12:48 pm and is filed under Weather. You can follow any responses to this entry through the RSS 2.0 feed. Both comments and pings are currently closed.