Time For An Outbreak of Arctic Air This Winter?

Just finished up my presentation for OMSI tomorrow; I wrap up the past year’s worth of weather before the forecasters stick their necks out (for the meteorological guillotine?).  Made a new graphic this time, showing the coldest winter high temp at PDX: 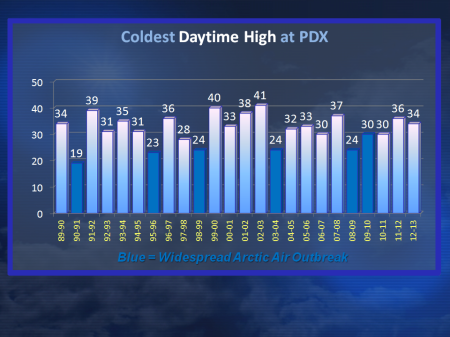 You can pick out the years where we saw a big intrusion of cold arctic air here into the Pacific Northwest.  I figure if the high temp was 30 or below it counts, especially if the lows were down in the teens.

The Dec 1990 and Jan/Feb 1996 events were especially cold; 3 days of highs 19-21 in 1990, and 5 days below 30 degrees  in 1996.  The 2009 event saw no snow cover and totally sunny skies, allowing high temps to reach 30-34 each day, a little warmer than those other events.  The 2 other events on the chart above?  January 2004’s cold only extended down into far northern Oregon and didn’t last too long.  December 1998 was pretty cold, but no real strong east wind and it went out with a whimper.  Dec 2008 was mainly about the snow…we never had a several days long string of sunny and cold weather, so cold-wise it wasn’t that severe.

For region-wide severity, I would rank them this way:

That shows how rare a BIG FREEZE really is here in the Pacific Northwest.  We only get a big one every 5-8 years I suppose.  We haven’t seen any “arctic action” for 3 winters, but it would not be unusual if we went another winter or two without it.

So what do YOU think?  That’s what the comments are for.

This entry was posted on Friday, October 25th, 2013 at 10:28 pm and is filed under Weather. You can follow any responses to this entry through the RSS 2.0 feed. Both comments and pings are currently closed.

83 Responses to Time For An Outbreak of Arctic Air This Winter?