Most of the final numbers are in and it was a big record-breaker today.  We forecast 94 here at FOX12; it hit 95 officially in Portland. 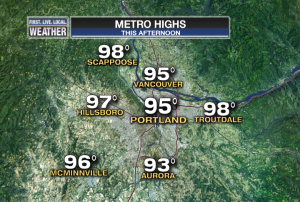 Look at those 98 degree temps in Troutdale and Scappoose!  Wow…that’s really hot.

It’s extremely safe to say that today was the hottest day of summer for much of the metro area, although PDX hit 97 back on June 30th.  I should also point out Hillsboro and Vancouver are both at their high temp at 5pm, so it could rise another degree.

Good news if you don’t like it this hot (who does?), nice push of cooler marine air is pushing into the gaps in the Coast Range and western Willamette Valley.  Eugene, Corvallis, and Kelso are already down around 80 degrees.  As a result, we lowered tomorrow’s forecast down into the upper 80s…a 6-10 degree temperature drop should be much better!

All models still in agreement with a major change occurring for next week.  We’ll go from well above average temps to well below average.  Showers could arrive as soon as Sunday afternoon.  In fact we are in a favorable position for thunderstorms as the first moisture arrive…something to keep an eye on.

Just got into work after running some errands…it’s real hot out there.

I notice it’s the hottest day of the year for quite a few locations.  Hillsboro, Scappoose, Troutdale (yesterday), and at my home it is up over 90, which didn’t happen yet this summer I think.  The Hillsboro temp is a record for the day as well.

East wind wasn’t as strong as I expected today, just briefly pushing into Troutdale during the overnight and morning hours.  In fact Troutdale was the hot spot with a 91 degree temp AT NOON!  Then it actually fell two degrees at 1pm as the wind clocked around to northwesterly and the dewpoint jumped.  Since then it’s been rising again just like all the other local observations.

Weak marine push made it all the way into the south Willamette Valley this morning, and there should be a better push tomorrow into the entire valley.  As a result, we lower tomorrow’s high from 90 to 88.  Either way another very warm day, but just not scorching hot like today.