A Taste of Fall In the Weather Maps

After a week on vacation, I came back to weather maps that look a little more “Fall-ish”.  It’s hard to describe, but the upper-level maps (mainly 500mb) have a little more action moving around the northern hemisphere compared to a week or so ago.  We also have a wet weather system sitting just offshore that promises to give us some humid and cooler weather the 2nd half of this week. 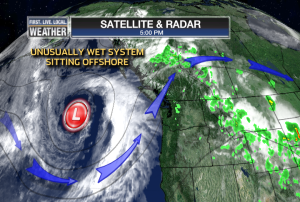 This plus no sign of real hot weather means that we’re going to make it through a good chunk (or all) of August with no heat wave!  This has been a summer of very little hot weather  west of the Cascades.  We’ve seen only one day 95+ here in Portland so far this summer.  Last year we had 6 by mid-August.  Salem has seen 3 and Eugene 6 so far this year…clearly a nice marine influence on the high temps here in the metro area.  Yet even with the lack of extreme heat we have seen a lot of sunshine and very warm temps interspersed with brief cooldowns.  I think most would say this summer has been great.  We haven’t had a below normal month temp-wise since January.  So a decent spring followed by a nice summer, what else can you ask for?  Okay, maybe a chance to actually see a thunderstorm in the city of Portland?  We haven’t officially seen a thunderstorm at PDX since last September.  But at least the chilly summers of 2008, 2010, & 2011 are a memory (for now).

What’s on tap?  The juicy system offshore drags its sorry tail end through the Pacific Northwest Thursday and Friday.  Lots of clouds, humid weather, and showers may be popping up both days.  Possibly convection (thunder) either day.

Beyond that we should see some sort of ridging, although once again it appears it won’t be a setup for hot weather.  Still, quite a bit of disagreement on strength of ridging next week…notice the 850mb ensemble chart from the 12z ECMWF today: 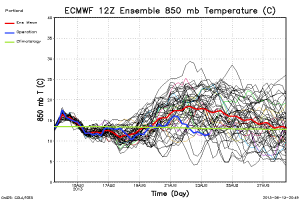 notice the average is higher than the operational run, a clue that the ridge may be a little stronger than what we see on the maps.  The 12z GFS: 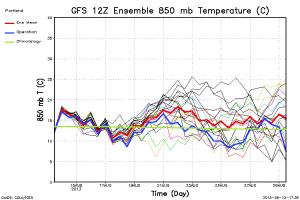 Similar look with the operational a little cooler than the average.

So…summer continues with no real extremes over the next 7 days or so.  Enjoy.

My bike ride last week went better than expected.  I survived and had no major issues.  For ME, it was a good accomplishment.  That road from Enterprise to Asotin, WA is amazing!  Check it out on Google Maps.  A 10 mile drop with curves down 3,000′ to the Grande Ronde River and then a rise 3,000′ in 10 miles via switchbacks up the other side is incredible…from sagebrush to forest in just an hour and a half or so.  That was my favorite day.  The next day was the hardest though, from Asotin, WA to Dayton, WA.  A long hot climb at the end of the day.  My hind end is just now recovering and I won’t be touching that bike for awhile!

This entry was posted on Tuesday, August 13th, 2013 at 8:04 pm and is filed under Weather. You can follow any responses to this entry through the RSS 2.0 feed. Both comments and pings are currently closed.

40 Responses to A Taste of Fall In the Weather Maps