I’ve been extremely busy the past 36 hours.  Worked late Wednesday night, in bed at 1am, up at 6:30am.  Field trip with my son’s entire school (270 kids!) over to Wildhorse Canyon (the old Big Muddy/Rajneeshpuram ranch).  Volunteered, worked in kitchen for 5 hours, slept 4-5 hours in the same bunk room as 8 boys, drove 3 hours back this morning, now back at work…I’m toast.  So it’ll be a brief post.

In general the cool and wet weather continues for at least the next week.  It won’t be quite as chilly the next few days since the cold upper level low is departing this evening.  In fact snow levels will be above 6,000′ the next few days.  But still cooler than average.

There are hints on the ECMWF and GFS that some sort of warmer pattern may appear about 8-9 days from now (around next weekend).  If you follow the AVERAGE (red) line on the latest two ensemble charts it’s pretty obvious.  The 18z GFS was an outlier with its chilly solution beyond Day 9: 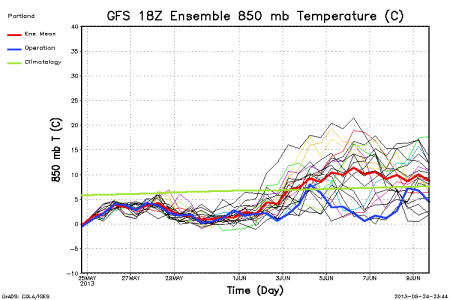 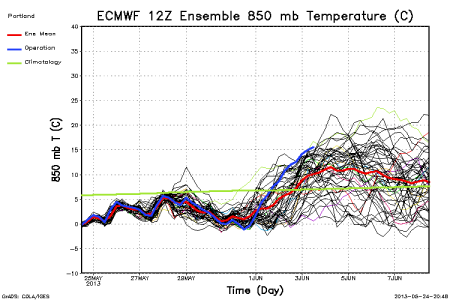 So maybe this is just a 3 week cool/wet period to be followed by a nice June…who knows.

My advice for the weekend?  BBQ, and then curl up in front of the fireplace and watch some Netflix.  I plan to sleep in…

On a side note, and since I’m a big fan of history…

I thought it was really neat to stand in the same ENORMOUS building where all those crazy folks and the Bhagwan had their huge meetings, and sleep in the same “hotel rooms” that were used back then.  The events that took place in that location and elsewhere across Oregon during those 5 years combined to make the biggest news story in our area in the past 50 years.  Anyone over 40 that lived in Oregon in the 80s knows what I’m talking about.  I doubt those people expected that 30 years later it would be full of screaming kids, sport courts, climbing walls, and a huge skatepark!

This entry was posted on Friday, May 24th, 2013 at 9:57 pm and is filed under Weather. You can follow any responses to this entry through the RSS 2.0 feed. Both comments and pings are currently closed.