Record Lows & A Look Ahead

The chilly and very dry air mass gave tons of weather stations east of the Cascades record lows on Tuesday morning.  Here’s a list from the Pendleton NWS:

Coming up…for those of you who think the 7 Day forecast never actually improves with time but most likely goes downhill?  Not this time; it appears Thursday and Friday we’ll see temps stay in the mid 70s.  The 00z WRF-GFS even tries to get us close to 80 on Friday…we’ll see.

So we may end up with 5 days of straight sunshine for this workweek! 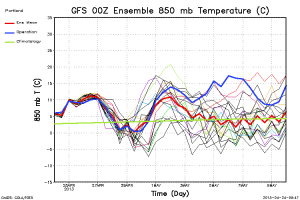 You can still see the chilly showers for the weekend, but HUGE variety of solutions by the time we get to Tuesday.  Anywhere from -4 to +17 at 850mb!  There seems to be a “cold cluster” like the chilly/showery ECMWF, and a cluster showing upper level heights rising dramatically…Roll the dice…

The snow line has retreated in the past two weeks on the west slopes of the Cascades.  I rode my bike up there in the bright sunshine this morning; just perfect with temps in the 50s, 1 vehicle and 1 bicycle passing me in one hour and 30 minutes!

Three weeks ago I ran into solid snow right after the snow gate.  Today I made it almost all the way to the “big corner” (where the road suddenly swings hard to the right in a switchback with a guardrail) with just a few thin patches of snow.  But  there was a solid area of snow just in front of that corner; so basically the road is passable up to 3,000′.  This is where I stopped since I wasn’t in the mood for wet feet again, and this job thing gets in the way of personal afternoon recreation too. 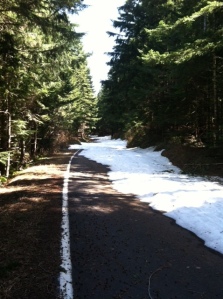 It’s great cycling with no cars beyond the snow gate; sometimes I get really crazy and ride on the wrong side of the road.  I know…real wild.

A perfect day today and we have several more to go.  We just made the fresh 7 Day forecast and you’ll notice it’s a bit warmer Thursday-Friday.  It appears that lowering surface pressure to the north keeps us from getting a strong onshore push those two days, so minimal low clouds and a warm atmosphere continues overhead.  That snow patch in the pic above will definitely be getting smaller.

For tomorrow, the weak offshore flow returns.  Combine that with a little warmer air mass overhead and we should pop temps up 4-7 degrees over today’s highs.  So we stayed with a 75 degree forecast.