Does A Dry March Mean A Dry Rest of Spring?

I think the short answer is…MAYBE.

As of this evening,  we have seen exactly 1/2 of our average rainfall January-March.  That’s the 3rd driest start to the year here in Portland, and the 3rd driest March too: 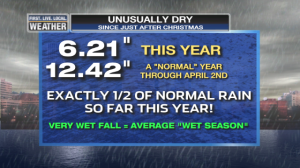 Since I had some free time this evening, I decided to take a closer look at what I had noticed about a week ago.  That lots of dry March years seem to have dry April-June weather too.  So I whipped out the Excel spreadsheet.

I looked at the Airport data that goes back to 1940.  By the way, that’s the official recording site for Portland and one that hasn’t moved for 70+ years.  The downtown location has moved many times, we don’t get real-time data from it, and it was on the roofs of buildings from the 1870s to the late 1920s.  The PDX Airport data is and has been most reliable.  I looked at the data and I see 9 March rainfall totals under 2.00″.  Then I looked at the following April-June rain totals.  This is what I found: 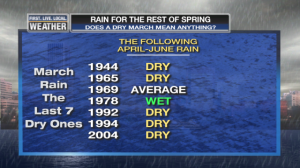 I could only fit in the last 7 of the 9 years on the graphic.  The other two were 1941, 1942.  Most important is that only 1 out of the 9 springs following were wetter than average (more than .20″ above).  Look how many springs continued to be dry.  I found that real interesting.

Of course there is no guarantee that we’ve got a drier than average spring ahead (note 1978), but the odds seem to be tilted in that direction.

Short term is definitely quite wet Thursday through early next week.  It’s going to turn chilly again this weekend too.  Get your outdoor projects done by daybreak Thursday if you don’t want to get wet.

Snowpack Update: Below Average In Oregon, Best Up North

It’s the beginning of April and for most parts of the Cascades (except the highest elevations in snowy springs) the peak snowpack has occurred.  From now through June or July it’s “melt out” time.  So now that winter is behind us, how did the snowpack do?  Pretty good in NW Oregon this year; a few big storms brought the snowpack up to average or even slightly above north of Mt.  Hood:

The rest of the state is average to well below average, there will likely be water issues in SE Oregon this summer as a drought continues there.  Here are the numbers averaged for each state and you can see that most of the West is well below normal:

The snowpack has been melting the last week with such mild temps.  I rode my bike up to about 2,500′ on Larch Mountain this afternoon.  You first start seeing patches of snow along the road around 2,000′.  Then there are parts of the side road (not travelled on) totally covered by up to 1′ of snow.  It’s interesting that there is little to no snow in the woods at that elevation, but the parts of the road near creeks and draws have the snow.  Colder air in winter and spring nights probably slows down the melting in those spots.  I had been in the same location three days ago and there was quite a bit of melting.  Areas that had 10-12″ on Saturday had almost nothing today.