It appears our last decent chance for rain this month has passed now.  Other than a sprinkle tomorrow (very unlikely) or an unexpected northward move of Sunday’s rain into our area, we’re going to be left with 1.46″ rain for the month.  Wow, and we had only about that much in February too!  Really weird if you think about it.

So how does that rank?  In the spirit of the season…bring on the bunnies!

It’ll likely be the 3rd driest, behind two drier ones in the 60s.  The airport records go back to around 1940.  It hasn’t been exceptionally warm, but we’ve just continued to see very weak weather systems.  I think we’ve had one good rainy/windy storm in a month or so.  That’s it.  A collection of weak systems and occasional upper-level ridging meant more sunshine than normal and much drier than average.

March is going to go out with a “warm weather bang” this weekend.  We raised the forecast temperatures for tomorrow and Saturday on our 7 Day forecast this afternoon/evening.  Today we hit 67 in Portland with partly cloudy skies, no offshore flow and a +3.4 degree temp at 850mb (5,000′) .  850mb temps rise about 10-11 degrees fahrenheit from there by Saturday afternoon.   No, I don’t think surface temps will jump 10 degrees, but it’ll be close.  Previous cases of sunshine, light east wind, and 850mb temps of +10 in March have given us 72-76 degree highs here in Portland.  So I think 74 is a good number for that day.  That would also tie the record high for the date.

Sunday is a tough call temp-wise.  Models are insistent on keeping all cloud cover and rain from Eugene south into SW Oregon; I’m not too worried about that.  We do start with east wind and then go calm in the afternoon here in the metro area.  Usually those conditions keep the high temperature about the same as the east wind day (Saturday) even though the atmosphere is a little cooler up above (+7 to +8).  I’m sticking with 70, but assuming it remains sunny we could be just as warm Sunday.

I clouded up Monday and Tuesday a bit more due to some sort of weak marine push coming in from the SW Sunday night.  Well back down into the 60s.  I’m going 65 but it could easily be “only” 60 or even lower if low clouds linger.

If you plan on travelling this weekend, keep in mind the weather system in California will be sending clouds and rain showers as far north as Florence, Eugene, & Bend during the day Sunday.  It wont be a beautiful Easter Sunday in SW Oregon.

A Bunch of Maps

Here you go, a bunch of maps to peruse.  Big picture = mild and dry or mild and more dry than wet the next week or so.  All ensembles are above average (wow, we haven’t said that much during spring the last few years) through about the 5th-6th of April.  Models also try to raise heights above average again about 12-15 days from now. 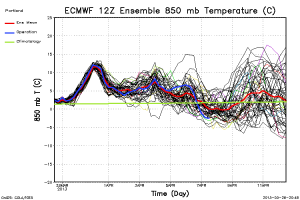 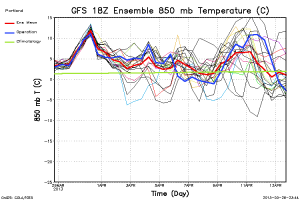 And last night’s run of the ECMWF  out to one month.  Same idea, then weakening ridging by mid-month and maybe some troughing late month. 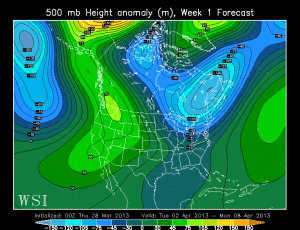 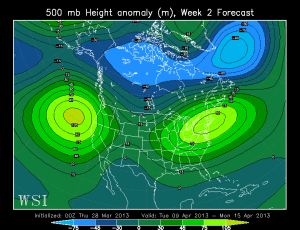 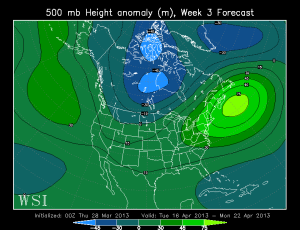