It felt like an average April day today over Portland, that was at 1800′ over Downtown Portland at the top of our transmission tower.  At the same time it was 63 degrees up there, it was 40 here in the city.  THAT is what we call an inversion; warmer air above and cool air trapped in the valleys.  The past two days have been an extreme example of this.  Look at today’s numbers in the Cascade foothills: 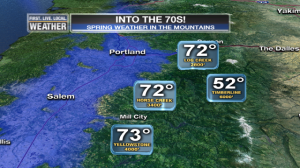 Yet Salem only crawled its way up to 33 degrees!

We got lucky in the metro area today; just enough leftover dry east wind to keep the solid fog/cloud deck from Wilsonville-Oregon City and south.  As a result, we made it to 46 degrees, finally a day near average.

But it won’t last.  This evening’s timelapse over downtown Portland clearly shows a weak southerly flow in the lowest elevations over the central part of the city bringing low clouds and fog north.

The east wind is very weak now, confined mostly to areas right around the west end of the Gorge and it’ll stay that way through tomorrow.  So that means widespread fog and low clouds and much cooler temps in the metro area tomorrow.

There is good news for Sunday and Monday; the east wind is coming back and it appears strong enough to clear all or most of the metro area again by Sunday afternoon.  Monday (MLK Day) looks sunny to me, similar to yesterday.  For areas south of Wilsonville (Salem-Eugene), you’ll remain in the gloom through at least Tuesday.

By the way, apparently it IS possible to ski in a swimming suit, or less.  Dwight sent this picture in from Cooper Spur.  He caught this couple enjoying the 55 degree temps, lightly clothed.  What about “snow-rash”?  Hmmm…