The temperature has been between 35 and 37 degrees here in Portland since yesterday evening’s commute!  Is that strange or what?  For the vast majority of us, the weather tomorrow will be almost exactly the same as today.  Yes, another gloomy and cool day in the lower elevations and warm and sunny closer to 2,000′ and above.

Those of you east of I-205 and near/south of the Columbia River will probably have a sunny day tomorrow!  You can see the general area here: 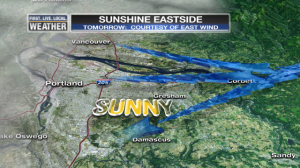 So what’s changing tonight and tomorrow?  We are seeing an east wind develop through west end of the Columbia River Gorge.  Corbett just gusted to 31 mph in the past hour as a colder pool of air is developing east of the Cascades.  Here’s a good example:   In the eastern Gorge, Ausperger Mountain at 3,000′ east of Home Valley was 40 degrees with a west wind at this time last night.  Right now it’s 24 degrees with an east wind.  Yet at 3,000′ west of the Cascades it’s about 50 degrees.  So now an easterly pressure gradient is up to around 4 millibars.  5-6 millibars by tomorrow morning should be enough to clear out those areas above.  The sunshine and a little mixing should be enough to finally push PDX into the 40-45 degree range.

Models have been terrible with the lowest 2,000′ of the atmosphere in this pattern, continually getting rid of the low clouds.  Even the 1.3km WRF-GFS keeps clearing the entire Willamette Valley out; that sure isn’t going to happen.  But, it’s done a good job showing the increasing easterly flow.  Notice the 12z cross-section showing breezy east wind over Troutdale through tomorrow.  Note that time runs from right to left:

Speaking of chilly…the average temperature for PDX the first 15 days of January is the coldest January in 20 years!  And, it’s the coldest month in 3 years (Dec 2009 was colder).  The combination of cold and clear nights and now very cool days are doing the trick.  The 2nd half of the month sure doesn’t look above average, but maybe near or a little below since we’ll have weather systems starting to move through here again starting next Tuesday.

We found sunshine over Portland!  Unfortunately you have to travel up to around 1500′ to find it.  This is the 2pm view from our tower cam at 1,800′. I was happy to see the sun up there at least.  We’re timelapsing it right now and I’ll try to post the movie later.  It’s always fun to see the movement in the low cloud layer; like watching someone stir a thick soup?

Temperatures in some Cascade locations have reached into the 60s today!  Meanwhile, stuck below the inversion in the fog and low clouds we are having real trouble reaching towards 40.

There are hints we might see some clearing in spots the next 24 hours…the WRF-GFS pushes east wind out of the Gorge and into the east part of the metro area tomorrow.  Interesting, I’ll blog again later.