My forecast for later tonight and early tomorrow morning is still the same.  I think there’s a decent chance a lot of us see snowflakes tomorrow morning, but it’ll be tough to get more than a dusting due to lack of moisture.

1. Colder temps, models have trended a little colder with cool air moving in from the north tomorrow night and Friday.  NAM is most aggressive with 850mb temps down around -8 to -9.  Other models not quite as cold, but we’ll have a tough time getting above 40 both Friday and Saturday even in the city under sunshine (most of the sun will be Friday).  Assuming we get some good clearing tomorrow night, it’s going to get real cold too; so I lowered both highs and lows a little again.

2. Beyond Saturday it’s going to be dry for quite a long time, back to inversion land with warmer mountains next week and cold temps in the valleys.  It still remains to be seen if we get decent east wind or not.  GFS says some decent onshore flow Monday-Wednesday as strong surface high pressure builds offshore, yet maintains a cold high over the Intermountain region at the same time.  That’s possible with the orientation of the upper ridge (just offshore instead of over or east of us).  Best guess is that we’ll see more fog next week with the inversion compared to what we saw the last week.  This pattern is going to last probably through all of next calendar week.  The 00z GFS has little no precipitation for the next 12 days!

3.  What you really want to know, are we going to get snow on Saturday?  I don’t know.

The general idea is for an upper level disturbance to drop south out of western Canada, spinning up some sort of surface low pressure that then gives some part of Cascadia (western Oregon/Washington/California) precipitation.  The NAM and GEM are now similar showing the low coming right down through Western Oregon, sending moisture right up over a cold east wind blowing out of the Gorge = snow to sea level.   Possibly several inches Saturday afternoon and evening in the Willamette Valley if this were to pan out.  The GFS, WRF-GFS, and our RPM are all dry or mostly dry.  They have the surface low a little faster and/or farther offshore.  In the case of the GFS, the southern part of the upper level disturbance is stronger and the northern part weaker, which puts much more energy into the early Saturday low coming down the coast.  This would give a great snowstorm to SW Oregon and Siskiyou Summit but leave us dry up here.  With such variation and it still being 60 hours away, we just don’t know which solution is going to play out at this time.  I’m somewhat confident that after a cold night Friday night and a very chilly air mass still over us, if we DO get moisture it should be in the form of snow.  Forget freezing rain and probably regular rain too.

Here are 3 different maps for 4pm Saturday showing the very weak system coming in from the north on the GFS, then the much wetter NAM and GEM.  Note that on the GFS the first and stronger low has already moved down into California by that time: 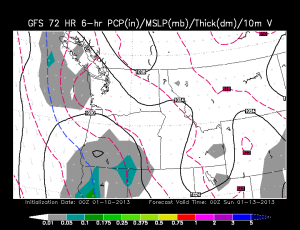 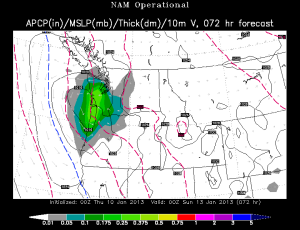 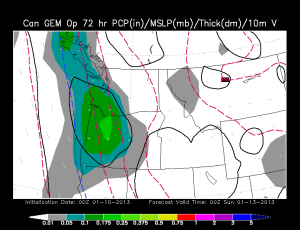 This entry was posted on Wednesday, January 9th, 2013 at 9:49 pm and is filed under Weather. You can follow any responses to this entry through the RSS 2.0 feed. Both comments and pings are currently closed.

267 Responses to 9:45pm…New Thoughts on Saturday