Unless you’re a hard core weather geek, just skip down to the previous post.

And here is the 00z GFS 850mb temp ensemble chart; interesting that there are a few more members this evening showing colder solution around next Monday-Tuesday.

End of the Cold, Briefly Warm, Then Chilly Again

The Gorge is warming quickly this morning.  The western Gorge warmed overnight, in fact this morning’s 47 is the warmest I’ve seen in over two weeks.  Here’s my temperature trace: 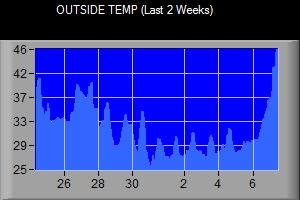 It’s amazing how quickly ice can disappear when it’s that warm too, now the warm air is arriving in the eastern Gorge as the pressure gradient goes westerly.  Parkdale just jumped from 34 to 47 in 90 minutes!  The rest of you at the lower elevations from Hood River to The Dalles will see the warming “Chinook” wind soon.

So now it’s on to a warm front Tuesday morning, a very warm day Tuesday…well into the 50s in the warm sector.  Then a sharp cold front late Tuesday night or just before daybreak Wednesday.  So two wet days ahead, although much of Tuesday will see rain north of Portland and dry south.

Okay, so let’s move on to what everyone is REALLY interested in…IS IT GOING TO SNOW AT SEA LEVEL LATER THIS WEEK?  Maybe, or maybe not…you like that answer?

Here we go again with another extremely frustrating pattern for snow lovers, cold showers coming in from the northwest behind the cold front Wednesday.  They taper off quite a bit Wednesday night and Thursday morning.

The atmosphere is cold enough IF we get decent showers later Wednesday night through Friday for snow to stick all the way to sea level.

Beyond Friday night, all models warm up the atmosphere enough that snow would be unlikely and/or there is no moisture to generate precipitation.  That could change of course since we’ve seen such variation on models beyond that period.

On Friday’s posting I talked about how models were having big issues deciding where to place a building upper-level ridge off the West Coast in the long range.  They seem to be in good agreement now that the ridge will be very close to the coastline through the foreseeable future.

So the whole package can be boiled down to this sentence:

Rainy and mild for a couple of days, then a brush with low elevation snow showers Thursday-Saturday, then on to mainly or all dry weather through next week.  That’ll take us through mid January.  Does that mean winter is over?  No, for all we know the arctic blast of the century is coming on January 28th (I just made that up).  I will continue to tell Wayne Garcia to not bother putting on his studded tires though.  A morning dusting or 1″ is no big deal for later this week, we’ve already done that back in December.

I did tell my family that the cold spell the past week was probably the coldest of the winter if we don’t get an arctic blast in the next 4 weeks.

Here are a bunch of maps, the first 3 are the 10 day maps showing 500mb ensemble heights next Wednesday, the 16th from the GFS, GEM, & ECMWF.  All very similar with the ridge quite close to us: 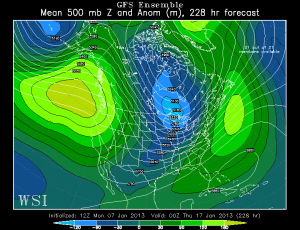 Then the 12z GFS and 00z ECMWF 850mb ensemble charts showing fewer members today that are really cold compared to 1 or 2 days ago.  That said, just a few still want to push the ridge farther west and bring arctic air south over us next Monday or Tuesday: 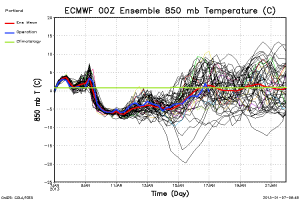 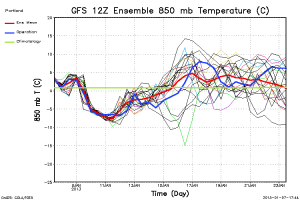