When Is The Gorge Going to Warm Up?

A Winter Storm Watch has been issued by the NWS for the central/eastern Columbia River Gorge (Cascade Locks to The Dalles) for tonight.  Actually, it’s technically not for The Dalles, but that’s Pendleton NWS area and they aren’t real coordinated with PDX sometimes.  There will be freezing rain at The Dalles tonight too.

The cold airmass has been very persistent (surprise!) in the Columbia River Gorge.  I live at 1,000′ just east of Corbett and have only been above freezing one day (33 degrees) in the last week.  There has been a solid layer of glaze ice since Thursday evening…about 1/2″ ice on objects with freezing drizzle/showers right now.  It’s unusual for me to be in a “silver thaw” for 3 days.  Here’s a nice pic of the rain chain all frozen up: 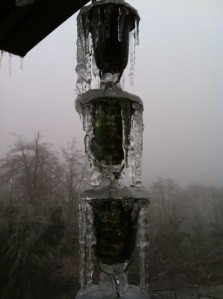 As a result, my wife doesn’t want (me) to drive anywhere so it’s definitely a weekend at home.

Looks like the “freezing rain level” in the western Gorge is around 500′, so the freeway is in decent shape until just east of Cascade Locks.  East of that area, some overnight clearing refroze the snow/ice.  The Dalles dropped to 22 after a day of snow yesterday.

There has been one big change the last few hours that says this cold air mass has just about played itself out…the depth of the cold air has shallowed dramatically since 3am.  It’s under 2,000′ thick in the Eastern Gorge.  Temps jumped at Wasco Butte, Auspurger Mtn, and Middle Mountain, all 2200′ and above.  Yes, they are near or below freezing, but that’s because the “real” air mass streaming in from the southwest is that cool.

Tonight, we get strong warm advection with the freezing level rising to around 7,000′.  Westside locations (away from the Gorge) will be around 50 degrees by sunrise.  That means likely just freezing rain tonight in the central/eastern Gorge, and mainly above the freeway level where temps will hover near or just below freezing up to about 1,500′.  It’ll be real patchy around Crown Point and Corbett since the milder south wind is going to be moving into that area during the night.

So to answer the initial question, when will it warm up?

Probably right around sunrise or just before a breezy west wind pushes at least to Cascade Locks, that means temps jump into the 40s for the first time in a week!  East of there, temps should jump at some after sunrise but by noon at the latest.  If the west wind makes it to The Dalles, it could jump close to 50 there!  Get out the shorts…

Until that time, only about 2 degrees warmer than what you have right now as all the precipitation falls tonight.

By the way, it’ll be cold enough west of the Cascades for snow in the hills again Wednesday night through Friday morning.  There’s no reason snow couldn’t stick all the way to sea level at times during that period too, but as mentioned in the previous post, it’ll all depend on moisture availability.  It’ll be a similar pattern to what we saw earlier in December.

If you’re looking for that big arctic blast somewhere a week or farther out, that’s still very much up in the air.  Nothing has changed on that front.  I’ll post my thoughts again Monday when I’m back at work.