Why is there a Snowflake in the 7 Day Forecast?

For the first time this year, it seems appropriate to add two snowflakes to the 7 Day Forecast.  I’ve hidden them pretty well, but they are there.

Twice in the next week, and for the first time this season, I see sticking snow at least down to 1,500′, and possibly a bit lower.  That would be Saturday morning and again next Tuesday morning.    Now just to be clear: 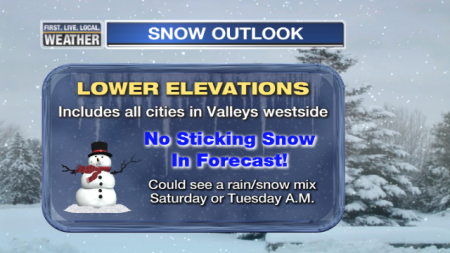 This isn’t a pattern where we get sticking snow down here in the city. but when I woke up and looked at the maps I noticed two things:

1.  Our RPM has speeded up the timing of the arrival of precipitation Saturday; right at daybreak.  The GFS is similar.  It also brings at least a mix of rain/snow into the northern Willamette Valley.  It is probably slightly cold showing actual snow accumulation at the lowest elevations here in the metro area at that time.   This model did pretty well with the lowlands last winter; in general when it showed such low elevation snow it actually occurred (somewhere in the valleys).  Also, the WRF-GFS soundings for that same time are very close to snow.  At the least they are cold enough that we should get sticking snow down close to 1,000′ when the precipitation starts.

2.  Cold air behind Monday’s rainy & windy system is even a bit colder than what’s coming in Saturday, but we have strong onshore flow (coming off the mild ocean) at the same time.  We don’t have that Saturday morning. so a different situation.  Also on Tuesday morning it’s off/on showery weather.   This means that sticking snow at that time is extremely unlikely in the lowest elevations, but near/above 1,500′ you could see a few inches.  The ECMWF was just about the coldest model for that morning.

If you plan on driving over the Coast Range Saturday morning, it appears to be quite snowy.  Same thing in the Cascades and higher elevations in the Columbia River Gorge from Cascade Locks eastward.  All areas will be clear Saturday afternoon as the snow level jumps up to 2,000′ or higher.