A Bit More Weather Action Ahead

Whew…it has been a SLOW December for weather geeks like me.  Different weatherwise than last December, but just as slow.  Last year at this time we had an upper level ridge overhead through much of the month, giving us cold valleys with nights well down into the 20s.  This time a ridge is farther offshore, letting weak systems move in from the northwest.  I made these two graphics today, since so many people ask me whether they should put the snow tires or studs on yet.  Wayne Garcia says he never bothered last year and was just fine.  It probably helped that he doesn’t have to drive in the mornings.  In fact I never once had to drive on snow on the way TO work last winter (once I was down to the freeway).  We haven’t had a daytime snow event in the metro area almost 3 years!  This is what I showed on TV tonight: 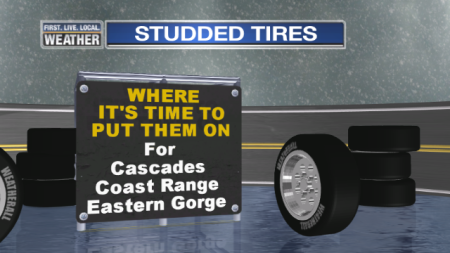 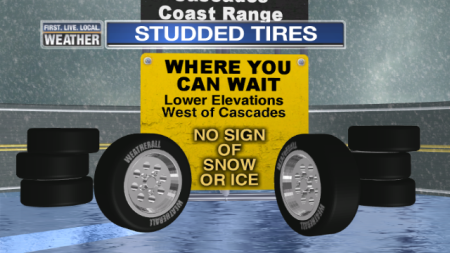 By the way, I’m sure not endorsing the use of studs considering all the damage they cause.  But you sure can’t beat the traction they provide.  And as long as they are legal some of you/us are going to use them and that’s reality.

Long range maps don’t show much change the next few days, but the ridge then appears to break down this weekend and beyond.  Models are in some disagreement as to what pattern evolves.  In general, it appears to be a bit cooler than average Friday through the middle of next week; note the 12z ECMWF and 00z GFS ensemble charts both showing 850mb temps a bit below average through that time: 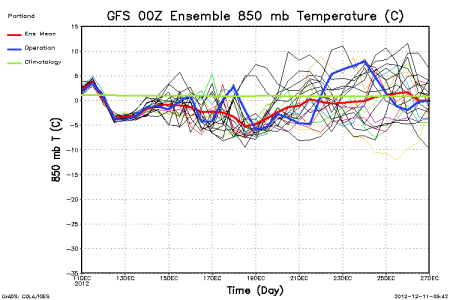 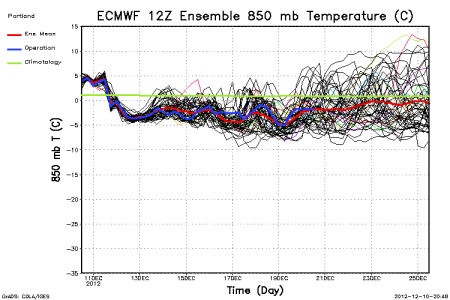 I notice that neither model shows any sort of cold arctic air, even among the ensembles.  But they both show -5 to -7 850mb temps possible this weekend or early next week.  When we get down to -7 is when we get excited about hilltop snow (1,000′ or below) behind cold fronts.  There appears to be quite a bit of mountain snow Friday through the middle of next week too; possibly the best of the season so far.

Why The USA Has Fallen Behind In Weather Forecasting 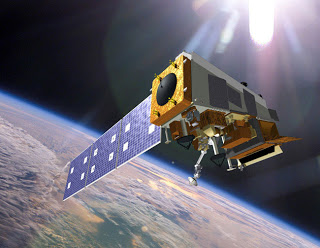 I just read an excellent (but long!) writeup by UW Professor Cliff Mass about the serious issues at hand in NOAA and the NWS.  These issues are degrading our ability to forecast weather as accurately as we can here in the USA as we fall behind other world forecasting and weather modeling organizations.  A good read!

By the way, I agree with Cliff that the local NWS employees are great.  They are totally different from when I started in this business almost 20 years ago.  I remember making a call over there in the early 1990s when they genuinely seemed annoyed that I called.  But every single one I have dealt with in the past 10 years has been helpful.  The problem is much higher up in that organization as Cliff spells out in his blog.