A very active cold front offshore should move onto the coastline by midnight at the latest, then cross in the Willamette Valley with solid moderate-heavy rainfall.  We’ve seen a ton of lightning off the coastline with the approaching front.  In fact the lightning strikes are all that show up since we have such horrible radar coverage (worst on the US coastline) on the central/southern Oregon coast.  So plenty of flashing the next few hours on the coast and the strong wind gusts should subside right after it passes.  Inland we MIGHT see a flash of lightning, but usually the cooler land kills the most active cells as we move into December.

We get a break tomorrow with just showers and sunbreaks. 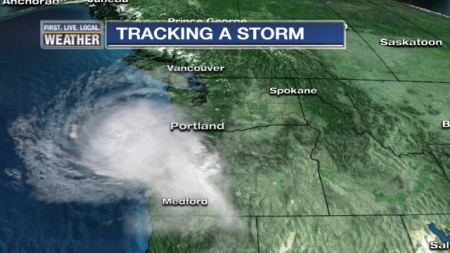 Models have come into better agreement (somewhat) tonight regarding the stronger system for tomorrow night.

1. Timing has speeded up quite a bit with the surface low or open wave crossing the Cascades well before sunrise.

2. No model develops a strong or deep low.

3. Several have a very weak amorphous blob of low pressure, others have a more defined low.

4. The WRF-GFS and our RPM both have a low tracking from the southern Oregon coast to about Spokane.  Remember strong wind is to the south of the low pressure center, so no model right now shows any threat for strong wind (40+ mph) from Salem northward.  Of course it’s possible  a surface low spins up a bit stronger than what models show (check out February 2002), but there’s no specific reason to believe that.  Hopefully 12z runs tomorrow morning all come together a little more.

It will be very windy with possible damaging wind behind the low in Central Oregon, SE Oregon, and possibly the Columbia Basin & Eastern Gorge early Sunday morning.  High Wind Watches are out for a good portion of that area.

On the positive side, a lot of snow coming up in the Cascades…possible 12-18″ between tonight and Sunday midday on Mt. Hood! 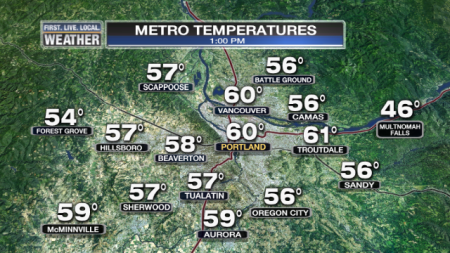 The south wind finally punched through to ALL of the metro area the past few hours and it feels like we stepped off the plane on a tropical island…or something along those lines.  Look at the 1pm temps…60 in Portland, breaking the record of 58 for the last day of November.

61 in Troutdale; you folks haven’t been above 48 in about a week!  Very nice warm southerly wind.

Enjoy it since we’ll go back to normal this evening as rain moves in.

Still tracking the possible strong wind for Sunday morning for someone, but need to look at more maps; I’ll blog about that this evening.