No, I don’t mean that decade with big hair and bad music.  I mean 80 degree and higher temps.  This year we saw 56 days at/above 80 here in Portland.  That’s about normal (55-56 is normal) and significantly warmer than the last two summers. 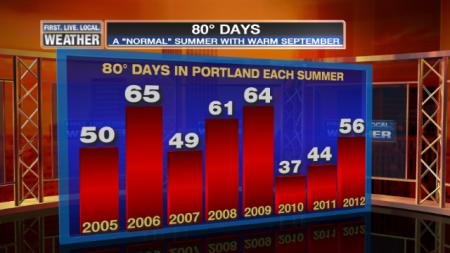 By this measure, one could say we achieved a “normal” warm season.  As mentioned NUMEROUS times in previous posts, it was unusually cool and wet early in the season and then unusually warm and dry at the end in August and September.