80 Degrees In Metro Today; But Rainy Season On the Way!

I hope you enjoyed one last 80 degree cloudless day here in the metro area today.  Of the 7 official NWS weather stations, 3 hit 80, 3 hit 79, and Vancouver and Troutdale were in the 75-77 range.  Portland’s official high was 79.  What a ride it has been eh?  Those of you that wanted summer to continue and make up for the wet and chilly start should be happy (including me).  And those that wanted the classic clear October days and chilly nights got that too.  Plus, from a weather geeks perspective, I find this weather far more invigorating than endless gloomy days in late September and October; there’s plenty of time for that between now and next March.  September and October are generally the deadest months of the year west of the Cascades for forecasters unless we get some sort of rare October storm.

I’m confident we won’t hit 80 degrees again this season.  And tomorrow I’m putting away the hoses, doing the fall garden chores before it rains and plants turn to mush, and covering the brush piles for burning later.

All long range models are now showing a wet pattern developing this upcoming weekend and continuing into NEXT week (the 14th-20th).  It’s just a normal wet westerly flow that wouldn’t be too exciting in any normal Fall.  But we’ve seen a complete absence of wet Pacific fronts so far this season.  If models are correct, this will be the “season-ending” event for the fire season across at least northern Oregon and all of Washington.  These two graphics make it pretty clear, they both show the 6-10 day total precipitation from the ECMWF: 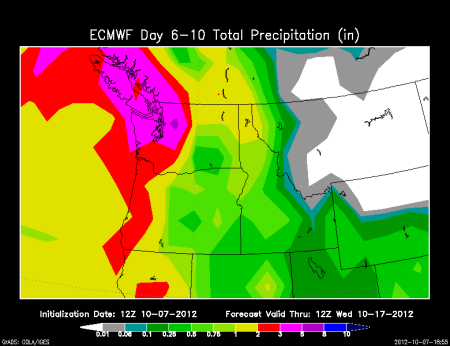 neither model has much of any rain until Friday night at the earliest, and most of it is Sunday and beyond.  Here’s the GFS:

The WRF-GFS from the UW uses the GFS for it’s input, so when you look at that one you get a little more detail because of the higher resolution:

You can see a sort of early season atmospheric river or pineapple express event for Vancouver Island and extreme NW Washington too with totals approaching 5″ in the mountains up there.  Of course 6-10 days out you shouldn’t read too much into any model, but I’m liking the trend I see on all models.

So does this mean it’ll be a soaker the rest of the Fall?  We don’t know that yet because it’s too far out.

It sure has been fun for outdoors people the past 5-6 weeks; I’ve never been able to ride my bike so comfortably (and dry!) so consistently in September and October.  I’ll admit when it turned cool those last 10 days of August with a lot of marine cloud cover, I had wondered if that was it and we were really only going to see 6 weeks of summer.  We had  lots more sunshine ahead.  Oh, and one more pic of my daughter enjoying the sunshine at Little Crater Lake on Saturday.  It was beautiful in the Cascades; just like summer, but cooler.  Not many people either!