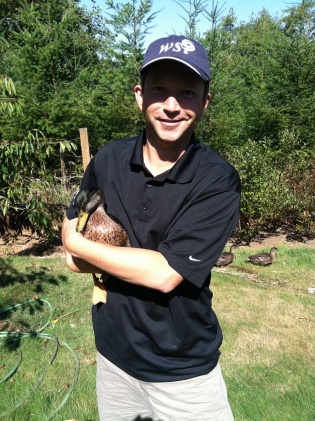 Hanging out with Nibbler while the duck ladies (in the background) wait for Mark to leave their drake alone.

This week, we head up to Corbett to do the show from the Nelsen house.  The guys cover Hurricane Issac, give you a summer recap here in the Northwest, and introduce Steph’s new baby boy!

I saw this on the web…Congratulations Tom!

This is my favorite part of this story.  It’s well known in the industry that Tom’s weathercast involves doing just about everything you’re not “supposed to do” in a weathercast.  For example: 30-50 maps/graphics in 3 minutes, labels missing on maps, unexplained stuff on those maps, and time jumps forward and backwards, etc…  Yet he may be the highest paid in the country and apparently his viewers love him!  If you’ve ever seen him he DOES seem very friendly and personable and a true weather geek too…Chief Meteorologist Mark Nelsen

Tom Skilling, the undisputed king of Chicago weather, will continue to reign supreme at WGN-Channel 9 and the Chicago Tribune for 10 more years.

In a blockbuster deal that was expected to be signed Wednesday, Skilling, 60, agreed to continue as chief meteorologist for the Tribune Co. flagships here through 2022. Terms were not disclosed, but Skilling is believed to be the highest paid local weatherman in the country, with a million-dollar salary and 12-person staff.

“This is a good deal for Tom and for Tribune because it gives both of them the security of one another for a decade,” said attorney Joel Weisman, Skilling’s longtime agent. “It’s particularly noteworthy in an era when people are uncertain about the future. Most contracts are actually growing shorter.”

Skilling’s last contract was a six-year deal signed in 2006.

Calling his client “the hardest working journalist in Chicago,” Weisman said Skilling “absolutely loves the work that he does and does it as well as anybody in the world,” adding: ”He’s at the top of his game — and he has been for a long time. He’s a genuine scholar and student of what he does who’s revered by his peers and selfless as a mentor.”

Skilling, who began his broadcasting career at age 14 in his native west suburban Aurora, has been chief meteorologist at WGN since 1978.