GOES Satellite Out of Service…Anyone Have a Spare? 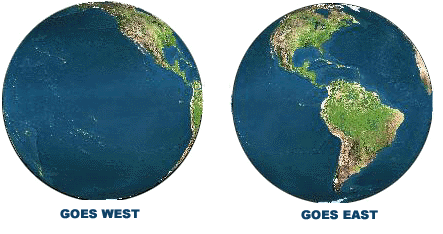 North America is served by two weather observing geosynchronous satellites.  That big word means they orbit the earth at the exact same “rate” as the rotation of the earth.  So if you could see them from the ground (you can’t, they are 22,000 miles up!), they would appear to sit in the same spot 24 hours a day.  Thus we get a constant view of cloud cover and other data.  You can see the view from the satellites in the image above.  One is usually located off the West Coast (GOES-WEST or #12) and one along the East Coast (GOES-EAST or #13).  That 2nd one suddenly went out of service this morning and was put into some sort of “safe mode”.  Luckily it didn’t affect us here on the west coast because our satellite is working just fine.  And, luckily, there has been a spare GOES satellite sitting over the middle of the country.  NOAA engineers just announced that it’s now in service.  That little guy has been sitting out in space for a few years waiting for his big moment and it’s here!   Here’s the note I got from our data provider, WSI, this afternoon:

NESDIS/NOAA Engineers have switched satellite ingest to GOES-14.  GOES-13 (EAST) remains out of service pending more investigation.  GOES-14 is centered at 105 degrees west longitude so satellite coverage will be limited over the central and eastern Atlantic Ocean, but coverage over the CONUS will be complete.  WSI will update this message if/when GOES-13 returns to service.

You can see the location of the standby satellite on the image below:

By the way, GOES-14 (the spare) is not one of the new GOES-R satellites.  Those get launched in 3-4 years.  They have far higher resolution, lightning detectors, and some other new toys. 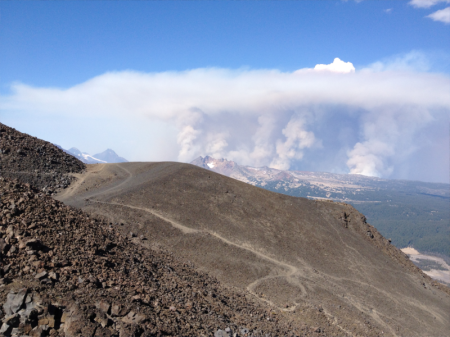 This morning’s sunrise was a reddish, orange color as fire smoke has returned to our sky.  This weekend was much cleaner smoke-wise and we could actually see the mountains; that was a nice change compared to a good part of September when we haven’t seen clear blue skies.

But now the smoke is back, mainly due to an upper-level low pressure system rotating smoke back at us from Washington and Idaho fires.  Take a look at one of the first visible satellite images this morning:

You can see lots of clouds in Eastern Oregon, but only patches of low clouds offshore and if you look closely, a few small patches of fog or clouds west of the Cascades in the valleys.  What’s most obvious is a thick layer of gray covering western Oregon north of Roseburg all the way up to Seattle and east into Central Oregon and eastern Washington.  Take a look at the 18,000′ wind directions from the WRF-GFS model for this morning:

The wind barbs “fly with the wind”, for example over us the upper-level wind is from the north-northeast, more clearly northeast over most of eastern Oregon.  The center of the disturbance is just about over Steen’s Mountain in extreme SE Oregon.   Think of it as an eddy in the atmosphere, just like in a river or stream you see little swirls of water as the flow slows down at the edges.  A tremendous amount of smoke has moved out of Idaho’s big fires and into Eastern Washington, then down over us.  Plus, lots of smoke from the central Washington fires too.  Basically lots of smoke is moving around in circles.

But there is good news; it’s only in the upper levels of the atmosphere, enough to give us an orange sun.  Below about 8,000′, our wind flow is from the north or northwest.  So our low-level air is still coming from a smoke-free area.  Air Quality Indexes are in the GOOD category all across western Oregon right now and they will stay that way.  Now you can enjoy the yellowish/orange Fall sky and breathe deeply as well.  It probably enhances the yellows and oranges starting to appear in some leaves too; an extra bonus.