Fall in The Lowlands; Summer in the Mountains

Expect another day of mostly gray skies and highs only around 70.  It’s Fall in the lowlands but still Summer in the mountains!  Look at the visible satellite image this morning:

It shows low clouds & fog have totally filled in west of the Cascades below about 2-3,000′.  That’s due to the cool and moist Pacific air; the moisture condenses during the long night into cloud cover and fog.  This guarantees another cool day.  As mentioned in the previous post, the sun angle now is as weak as it is in mid-late March.  So the cool air that settles into the valleys at night is very slow to mix with much warmer air above.  Look at the ODOT cam from Government Camp…it’s around 70 up there this morning and sunny: 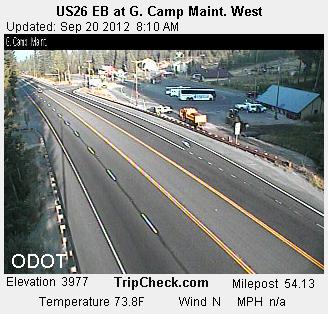 In fact the morning balloon sounding at Salem showed a +22 degree celsius temperature!  The  atmosphere above is warm enough to get us to 90 or higher, but only if the warm air were to mix down;  it definitely won’t.   So if you want summer today (albeit a bit smoky) head to the mountains.  It’ll be the same tomorrow.

Models had shown the increase in marine air in general, but they were 2 days too slow.  That sad part, if you’re looking for some sun, is that they show the marine layer deepening as we head into the weekend.  We may only see highs in the 60s Friday-Sunday if the WRF-GFS is correct.    This is the 4km cross-section, time goes from RIGHT TO LEFT.  That’s yesterday at 5pm through Sunday 5am.  You can see the marine layer this morning, a little less this afternoon, then much deeper Friday and Saturday.  The green colors are relative humidity.

A thick marine layer to 5,000′ through Monday or Tuesday…yuck.  There will be plenty of gray in October and November so I was hoping to hold off on that a bit longer.  Apparently the gloom is back west of the Cascades.  Too bad we couldn’t get a 2″ soaking of rain to go with it.

I’m off yesterday through Sunday due to a planned family medical issue but have PLENTY of time to blog while hanging out with doctors and nurses; everything is doing okay though so that’s good news.