Is Summer Getting Later? Recently, Yes!

Lows in the 30’s this morning in outlying areas sure confirm that summer is over meteorologically, although we still have some warm and dry weather ahead.  So let’s look back:

NCDC says Summer 2012 across the USA was the 3rd warmest on record, mainly due to near continuous heat in the Rockies and the extreme heat earlier in the summer in the central/eastern part of the country. 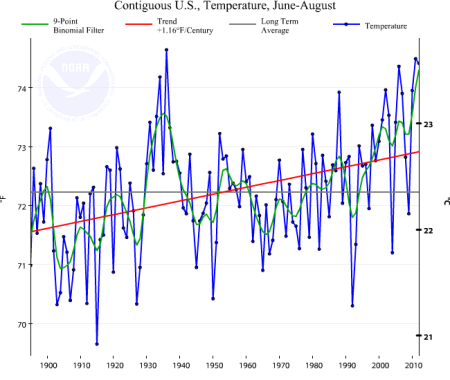 Now take a look at just the Pacific Northwest:

Summers have generally been warming in the past 100 years, although just about all of that is post 1960. Note the big 1930s heat that brought the Dust Bowl to the central parts of the USA is mostly absent here in the Northwest.  The 20s and 30s were warmer than average, but you don’t see the huge spikes.  Those 15 years of cool summers from the early 40s to mid 50s must have been really annoying to farmers don’t you think?  Here’s something else that sticks out…there appears to be a trend downward in summer temps since around 2003.  Although we recovered to above average this year, mainly due to heat east of the Cascades when those areas were on the edge of the hot Rockies upper-level ridge.

Okay, now to just the Oregon Zone 2 chart, which is all the lower elevations of Western Oregon between the Coast Range and Cascades: 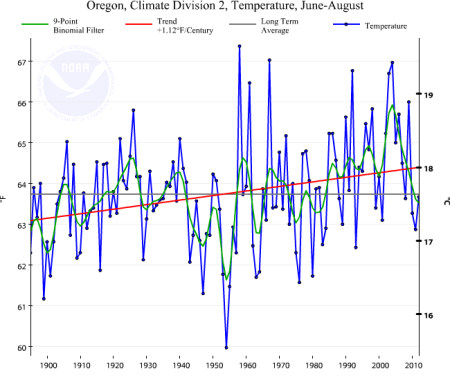 A little different, the 20s’ /30s don’t stick out as much, and a more obvious trend of warming summers from the early 70s until around 2003.  Then the same (a bit more dramatic) fall in summer temps.  Summer 2012 was warmer than the last two, but just barely made it to average.    What’s going on?  I don’t know, I’m just a short-term forecaster and big into numbers.  I do know the greenhouse I built last Fall was a great investment.

Here are two charts that seem so point to summers getting “later” across our region.  First, just August temps for the Pacific Northwest:

Wow, no downward trend!  August keeps warming up across the Pacific Northwest.  In fact this year saw one of the 3 warmest in the past 30 years!  Interesting don’t you think?  What’s most obvious to me is the disappearance of “cool Augusts”.  We haven’t seen a real cool one since 2000!  Occasional cool Augusts were the norm through the early 1990s.  I didn’t include just the Oregon Zone 2 chart for August because it’s almost exactly the same. 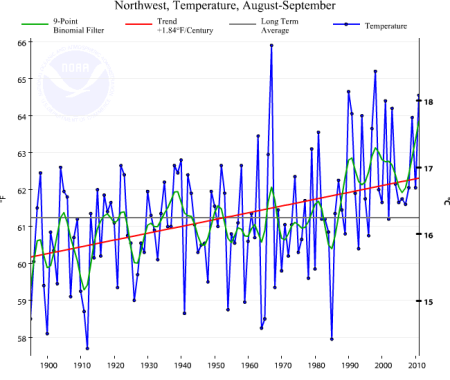 Looks like a trend to me.  The past 8-10 years (on average) current climate favors lots of patience for gardeners and outdoors enthusiast.  Our early summers have been unusually cool and wet (on average) and later summer/early Fall has been sunnier and warmer than average.  Will this continue the next 5-10 years?  Who knows.  And we can’t make too much out of short-term trends.   Somehow I got on a big anti-global warming email list and yesterday I saw a chart like this come across showing Pacific Northwest summer temps heading downward at “an alarming rate”.  This is what we call cherry-picking.  The graph starts in 2003.  You can compare it to the June-August NW Temp chart up above and see what they did.  They chose the hot summer of 2003 as a starting point to really make it look dramatic:

A person could have done the same thing with 1993-2003 and made it look like hellish global warming had set in.   For that matter, you could take the Aug-Sept Northwest chart and say “late summers have been cooling since 1998!”.  This is the reason I like to just present all the data and look at the interesting trends and let you make your own judgement, or maybe better to just wait 50 years and see what happens?