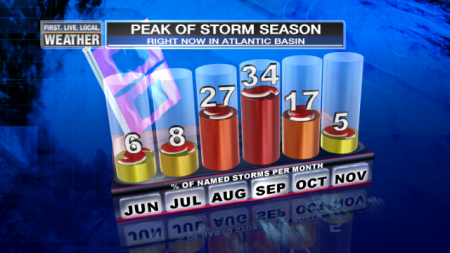 We are in the peak of the storm season now for hurricanes and tropical storms.   About 1/3 of all named storms each season occur in September.

So why no hurricanes on the West Coast?  Too cold…the ocean that is.  You need 80 degree or warmer ocean water to keep a tropical cyclone going.  On our side of the continent you have to get down around Cabo San Lucas in Baja California before you find water that warm.  Lots of storms and hurricanes form each summer off the coast of Mexico, but they quickly die as they head north into the colder ocean water.  If a storm is very strong and shoots north very quickly, it CAN make it to Los Angeles or San Diego.  It happened once during the .20th century, the 1939 Long Beach Hurricane.  At landfall it was just a tropical storm.

It’s a different story on the east side of North America.  The warm Gulf Stream ocean current pushes 80 degree water up around Chesapeake Bay in the late summer, allowing storms to move much farther north.

Our weather here in the Pacific Northwest?  Dullsville…

Our chance for showers tomorrow looks quite small as an upper-level disturbance moves by to the north.  If so, then PDX will probably end up dry for the month of August.  Shooting from the hip now, I think we’ve only had a dry August 4 times in our history here.  Usually SOMETHING slips in near the end of the month.  Plus, looking ahead, models are dry and a bit warmer than normal as we head into early September.  Keep watering!

This entry was posted on Tuesday, August 28th, 2012 at 11:13 pm and is filed under Weather. You can follow any responses to this entry through the RSS 2.0 feed. Both comments and pings are currently closed.