Cool Weekend Ahead, June May End Cool Too

A cold upper trough sits offshore right now and pretty much stays there until Tuesday.  So get used to more cloud cover, off/on showers, and cooler than average temperatures.

Models keep implying we get enough instability with the cooler air aloft tomorrow for a few thunderstorms.  This will be in a south-southwest flow ahead of the trough.  That’s the extent of interesting weather to look forward to in the upcoming week.

We are heading into the deadest weather time of the year.  Rarely do we have much to talk about between late June and early October.  Occasional extreme heat or some thunderstorms west of the Cascades are about it.  I tend to blog a bit less during this time as a result; it’s a bit harder to get inspired.  That’s also the reason I prefer to take just about all my vacation time June-August too.

Beyond Tuesday, models are showing some sort of ridging for the latter half of next week.  But neither the ECMWF or GFS show this as the BIG SHIFT into our summer pattern.  Check out the 12z ECMWF ensemble chart: 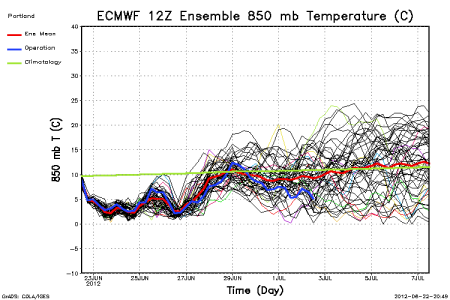 and then the 00z GFS chart:

They both show brief warming the 2nd half of next week, then just average or below average 850mb temps beyond that time into the first few days of July.  So this is going to go down as another cooler and wetter than average June.  It doesn’t seem THAT bad to me, but that might be because this Spring hasn’t been nearly as bad as the previous two.  I showed this graphic last night; the number of 80 degree days from April through June. 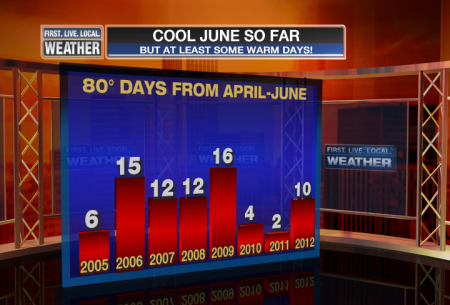 Last year we only had 2 through June.  This year we’ll probably end up with 11 or 12.  The big change this year is that we haven’t seen extended periods of cold and wet; it’s been broken up by occasional brief warm spells.

This entry was posted on Friday, June 22nd, 2012 at 11:12 pm and is filed under Weather. You can follow any responses to this entry through the RSS 2.0 feed. Both comments and pings are currently closed.

63 Responses to Cool Weekend Ahead, June May End Cool Too