A LOT of driving; that would best describe the past 11 days of my life.

I’ve never done a big road trip with my family so I figured we should do it big.  And we did.   On the day of the Grand Floral Parade I packed up the travel trailer, fueled up (the first of 18 gas station stops), and headed for Reno.  I got there at sunset and met my wife and two kids who had been staying with relatives for a week.

Then it was on to the Great Sand Dunes National Park, Grand Teton National Park, and Yellowstone.   Did you know it’s possible to do a 4 hour trip of Yellowstone, including standing with 1,000 others watching Old Faithful do its thing?  We did.

It totalled 3,255 miles.  Longest day was about 650 from Reno, NV to Green River, UT.  That was a 14 hour day, compounded by lots of up and down on the Loneliest Highway in the USA, plus I forgot we lose an hour traveling into Mountain Time.

Here are a few thoughts:

1.  Even though I am one of the chief complainers about our cloudy and wet weather, I’ll try to complain a bit less.  It’s amazing at what a narrow strip of “greenness” we are here in western Oregon and Washington.  The entire rest of the Western USA is never far from drought if not in it.  Only the 1st 100 miles and the last 50 were real green (okay, some in northern Idaho too).  All the rest of the drive was mostly sagebrush, dry grass, and some trees at times.  Even the Rockies aren’t nearly as green as the Cascades.  You have to get up around 8,000′ or so in Colorado to see trees. 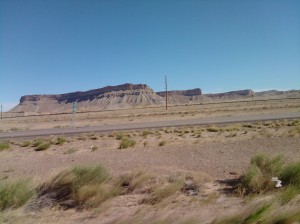 2.  Weirdest Sight?  In Wyoming I saw a pickup towing a scary old travel trailer (think “free candy”)…which was towing a trailer with 4 wheelers!  Is that legal?  Looked like a nightmare waiting to happen on a windy freeway.   Sorry, no pic, but really, I did see it.

3.  No Thunderstorms!  Can you believe all those days traveling in summer through Nevada, Utah, and the Rockies, I didn’t see a single flash of lightning or hear a rumble of thunder?  Ughhh, no exciting weather at all.  Lots of sunny warm days and very cold nights in spots.

4.  Favorite Places.  Grand Teton National Park was my favorite, and beautiful.  So was Yellowstone, but leaving Old Faithful I felt like I was in a mall parking lot looking for my car…too many people and too big.

I did feel that it was important to share in that time-honored American tradition of going faster than the speed limit in a national park.  Wow…45 mph maximum for about 50 miles…slow.  Oh, and at one point I had to slam on the brakes because the fancy sports care ahead of me slowed down to take a (moving) picture of some sort of wildlife.  Pull off the road!

5.  Most Interesting Spot I Didn’t Know About.  Quake Lake was formed in 1959 when a huge landslide came off a mountain, damming the Madison River (just NW of Yellowstone Park).

You can see all the dead trees still sticking out of the water.   This is a picture of the mountain, still bare after 50+ years.

6. Dumpster Fire at Truck Stop in Ritzville.  This appeared to be the most exciting event for our kids…on the last day.  Pulling into the gas station, flames were leaping out of a metal dumpster.  I just shrugged and mumbled “it’ll burn down, at least they’ll have more space for garbage”.  Instead my son leaped out and did a running commentary on the firefighters arriving.  He’ll probably be posting that HD video on YouTube I suppose…good times.

7.  Why can’t we pump our own gas in Oregon?  So bizarre…and I even grew up here!  I could get in and out of a gas station in 3-5 minutes easily in other states.  Here I have to wait for someone to come out.  Sometimes on the way home at midnight it’s quite a wait.

By the way, I wouldn’t advise doing all that driving in such a short period.  We decided to do about half that mileage next year during the same period.

Speaking of mileage, at each stop I kept a running tab on miles, gas used, mileage, and cost.

We were pulling our hybrid travel trailer with a Toyota 4Runner.  It normally gets about 18 mpg, but I only average 11-13 mph towing.  Note the really bad mileage at the end.  Strong west wind from Butte, Montana all the way to Hood River (briefly calm in N. Idaho).

This entry was posted on Wednesday, June 20th, 2012 at 11:06 pm and is filed under Weather. You can follow any responses to this entry through the RSS 2.0 feed. Both comments and pings are currently closed.